The world’s largest technology company was accused of failing to take proper safety measures and even attempting to conceal the incident to minimize damage to its reputation.

The plant is located less than 4 kilometers from Dongtan New Town in Hwaseong City and Suwon City, where 1.3 million residents live in both areas. 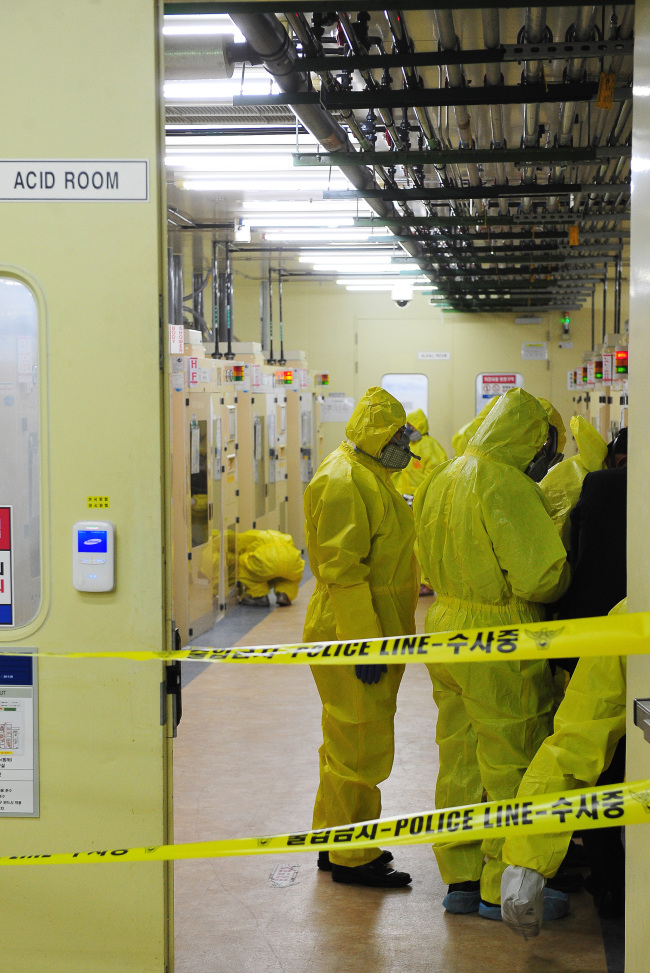 Some 2 to 10 liters of a 50 percent solution of hydrofluoric acid leaked at 1:22 p.m. Sunday, said police, quoting Samsung officials.

The repair work on the pipe, which was thought to have a broken safety valve, started at 11:00 p.m.

Allegedly, Samsung Electronics and the subcontract maintenance firm did not report the leakage to the government of Gyeonggi Province nor properly plug the holes in the pipe. They filled the cracks with a mere plastic bag before the repair work started.

“(We) first judged the amount of leakage was infinitesimal, so plugged the hole with the plastic bag,” said Lee Jong-chae, director of the maintenance firm STI Co., Ltd.

The repair work ended at 4:59 a.m. on Monday, according to the police.

The five maintenance workers felt pain in their throat and chest in the morning and were brought to hospitals.

The workers reportedly had to spend four more hours in ambulances being sent back and forth from hospital to hospital while Samsung was allegedly trying to hide the accident from reporters.

One worker surnamed Park was dead at around 1 p.m.

Samsung initially blamed the death on his violation of safety rules. The company said the deceased worker was exposed to the toxic chemical since he did not wear a chemical protection suit. But the bereaved family countered the claim, which then forced the company to later admit that he wore the gear.

“When the amount of the leakage was small, they did not wear the protection suits, but they wore them when the situation was getting worse,” said an uncle of Park, adding the family would not hold the funeral until the cause and circumstances of his death are confirmed.

The firm reported the death of the worker at 2:15 p.m. on Monday to the police and at 2:40 p.m. to the Gyeonggi Provincial Government.

The Ministry of Environment said any further leakage in nearby areas has not been detected.

The residents and people who live in other industrial areas in Korea are, however, worried about other possible chemical leaks as the latest accident came close on the heels of another disastrous accident last September in Gumi, in which five people were killed with 18 injured and thousands hospitalized; and one in Sangju on Jan. 12 in which a 200-ton aqueous solution of hydrochloric acid was leaked and 700 residents were evacuated.

The police said it would investigate to find the exact cause of the accident, and the Ministry of Environment pledged to conduct research if there is any chemical residue in the air.

The Gyeonggi Provincial Government also said it would see if there was any breach of the law in the operation of the plant and the repair work.

“Samsung apologizes for the concern it causes to the people and gives sincere condolences to the victim and his families. We will cooperate with the police in the investigation and come up with measures to prevent a similar accident from occurring,” said Jun Dong-soo, the president of the memory division of Samsung’s semiconductor business, through a press statement.

The electronics firm has been blamed for other allegations such as turning a blind eye to its workers in semiconductor lines who died of leukemia.