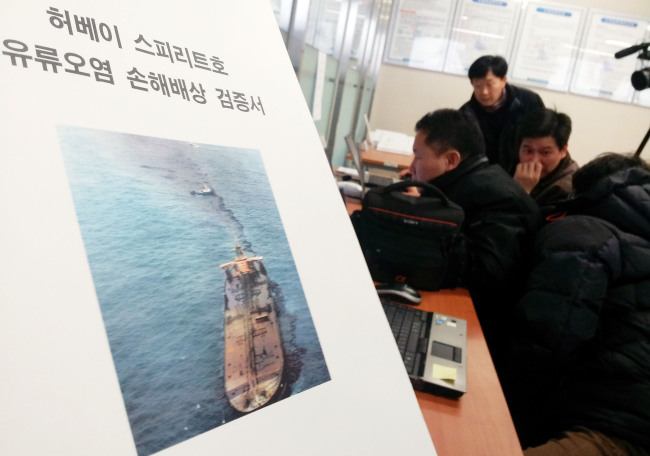 Taean residents read the court ruling that awarded compensation for an oil spill to victims in the region on Wednesday at a branch office of Daejeon District Court in Seosan, South Chungcheong Province. ( Yonhap News)
A court’s ruling on the Taean oil spill on Wednesday is likely to rekindle controversy as its assessment of financial damages fell short of expectations.

About 128,000 people including residents, fishing and tourism business operators and local government offices sought 4.22 trillion won in damages. The court’s estimate for the damages on Wednesday, however, only accounts for 17 percent of the claims.

Residents in the region reportedly are furious with the decision and said they would file lawsuits individually against the court’s ruling. There are many, particularly those engaged in non-fishing industries such as tourism, who failed to gain the court’s acknowledgement as victims. Worse yet, the victims have only two weeks left to file objections to the court’s decision.

“We have waited for five years without any of compensation. This is outrageous,” said a resident.

It was the first court decision in five years after the massive oil leak virtually destroyed numerous fish farms and nearby parks in the region once famous for its abundant ecological resources.

The oil spill took place on Dec. 7, 2007, off Taean County when bad weather caused a collision between the oil tanker Heibei Spirit and a seabound crane operated by Samsung Heavy Industries Co., an industrial arm of Samsung Group, the country’s largest conglomerate.

The court’s ruling ordered the Hong Kong-registered Heibei Spirit to pay 145.8 billion won and Samsung 5.6 billion won. The International Oil Pollution Compensation Funds and the Korean government are to make up the rest with 178.4 billion won and 404.3 billion won, respectively.

Another legal wrangle is expected as the Heibei Spirit and the IOPC are also expressing reservations over the ruling. Both parties are likely to file civil suits as the amounts are far higher than their own assessments.