It is the world’s first passenger jet built mainly from lightweight carbon-plastic materials, while the use of a lithium-ion battery to start the auxiliary power unit is also unprecedented.

The innovative technologies cut fuel costs largely by about a fifth. Airline companies worldwide have ordered more than 800 of the jets, which have a price of $207 million.

But the 787 has been hit by technical and electric malfunctions since its first commercial service in November 2011. 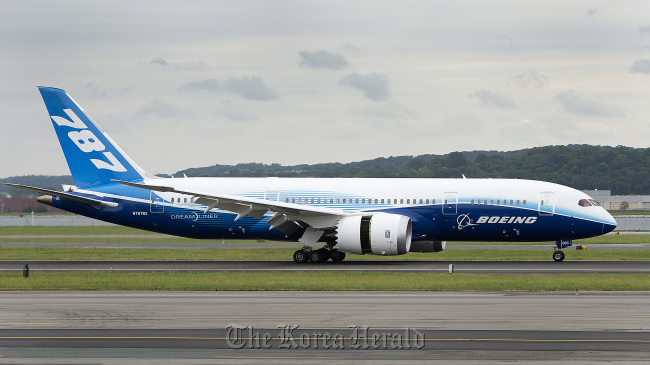 The Boeing Co. 787 Dreamliner. (Bloomberg)
A recent series of incidents are renewing doubts whether the jet is worthy of the name “Dreamliner.”

It is not uncommon that a newly-designed aircraft suffers some mishaps in the early days of operation. Airlines also receive large discounts for potential early mishaps.

But for the 787, what has sparked safety concerns is the new technology it has based its sales pitch on.

Following a wide-ranging review of the aircraft by U.S. authorities, Japan’s Transport Ministry also launched an investigation into two fuel leaks on a jet operated by Japan Airlines on Tuesday.

Over the weekend, the JAL jet, which was undergoing checks in Japan following a fuel leak at Boston airport last week, again leaked fuel during tests. Both leaks were due to separate valve-related problems.

Announcing their review on Friday, U.S. transportation officials, and Boeing, said the aircraft was safe to fly, but they needed to take a comprehensive look at the plane to ensure there were no flaws that should be remedied.

Industry watchers and companies say the recent incidents would not hurt Boeing’s technical supremacy, with no order cancellations announced yet.

Korea’s biggest flag carrier Korean Air has also purchased 10 units of the 787 aircraft, with the first flight scheduled for 2016.