[ The Korea Herald – Send E-mail ]
[Voice] Who should welfare prioritize?
With the next government promising major welfare expansion ...
By Korea Herald
Published : Jan 14, 2013 - 20:37
Updated : Jan 14, 2013 - 20:38
As the nation’s head for the next five years, President-elect Park Geun-hye has promised to usher in a new era of hope and happiness.

A major expansion of the social welfare system is to be the means to achieve this lofty vision. Park has proposed doubling the old-age subsidy for the majority of elderly and expanding coverage to the rest, halving the cost of college tuition, and providing free treatment for four of the most serious health conditions, among a raft of other welfare pledges.

Park has estimated the cost of her welfare plans at close to 135 trillion won, much of it to be funded by uncovering and taxing the underground economy.

Already, however, Park has faced calls to scale down and prioritize. In a policy briefing to Park’s transition team on Friday, the Ministry of Health and Welfare poured cold water on the proposals relating to its department, claiming they would cost an extra 50 trillion won over the next five years, far above Park’s estimate of around 28 trillion won. 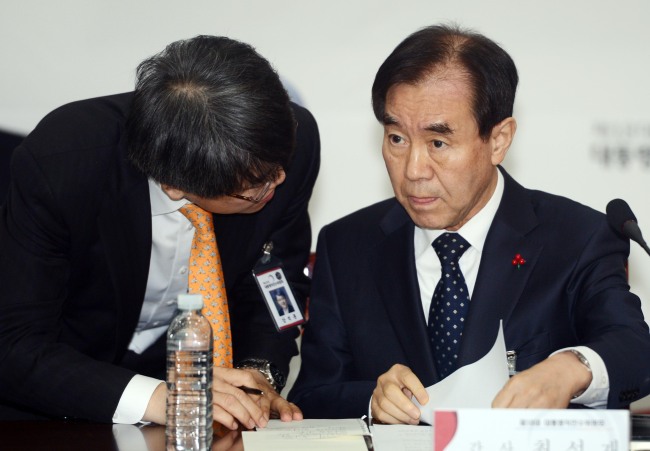 Choi Sung-jae (right), the head of the presidential transition team’s subcommittee for employment and welfare, speaks with Kang Seog-hoon of the state affairs planning and coordination subcommittee. Choi is responsible for implementing President-elect Park Geun-hye’s welfare pledges. (Yonhap News)
Regardless of whether she succeeds in implementing all or most of her plans, Park faces the challenge of pleasing numerous interested parties with limited resources.

Jo Joon-yong, a professor of social welfare at Hallym University in Chuncheon, Gangwon Province, believes Park should focus primarily on those who have fallen through the gaps in the existing welfare system. Where traditional social mores once helped to ensure the security of vulnerable groups such as the elderly, he said, modernization and economic crises have left a void that must be filled by the government.

“They are located there because they have relatives or family who were supposed to take care of them but didn’t actually get any help from their parents or their relatives,” Jo told The Korea Herald, adding that disadvantaged people with assets to their name but no source of income also slip through the cracks.

“In Korea, and in most Asian countries, filial piety is one of the main social policy ideas. So our government, or our social policy, also emphasized filial piety and family responsibility. … (Now) people can’t actually expect help from their family or relatives.”

Others stress the importance of tailoring policies to benefit not just hard-up individuals but the greater economy as well. Jun Ho-sung, a professor of social welfare policy at Kangnam University, said that Park should pay attention to the issue of a shrinking workforce in the future.

“Assuming that resources are limited, welfare policies’ top priority should, naturally, be the poor strata,” said Jun. “And if I departmentalize according to the various social welfare sections like the elderly, children, the handicapped, and women, I think policies for children should come first to secure (an) economically active population in the future, considering the low-fertility and population-aging tendency in Korea.”

Some of the biggest changes to the country’s benefit’s system were made after the 1997-1998 Asian Financial Crisis, which drastically exposed the limits of traditional family mores and the temporality of full employment.

As documented by Sahmyook University professor In-Young Jung in a comparison of welfare systems in different countries, the country’s four major benefits schemes ― employment insurance, the nation pension, accident compensation insurance ― were merged into the NBLS general assistance scheme in the wake of the crisis.

Between 1996 and 2001, public spending on welfare soared from 5.3 to 8.3 percent of the GDP. While Korea saw the fastest growth in social spending among OCED countries from 1990-2007, the nation still came second to last in terms of overall spending in 2010 ― though significant new social spending has been added since then.

While resistance to “welfare populism” had been notable on the conservative side of the political aisle before 2012, it dissipated dramatically after the defeat of a referendum called by former Seoul mayor Oh Se-hoon to keep some means-testing on free school meals. Since then, a bipartisan consensus has emerged strongly in favor of big increases in welfare provision.

Among the most frequently highlighted areas of policy concern is the high cost of raising children in Korea. Unsurprisingly, then, Park’s welfare pledges include a proposal to provide free child care for the first five years of a child’s life. It is here, in the area of children and family, that Seoul National University social welfare professor Lee Bong-jo thinks Park should concentrate her efforts.

“If you look at the composition of the public welfare spending, the areas on children and family are utterly low compared to other OECD countries, so I think that is one area we need to learn from,” said Lee.

“And also, given that President-elect Park’s proposals include many areas of expanding social services, I think we need to learn more about social service delivery system and control measures from countries like the U.K. and Sweden.”

Whether expanded welfare services should be universal or targeted is another matter of contention. Critics of the universal model say that benefits that go to all regardless of income are wasteful, while proponents insist they cut down on administrative waste and foster social solidarity. Such is the scale of poverty and low level of services in Korea currently; however, an intensive, targeted approach is required first, according to Lee.

“… Even (with) the universal platform, in terms of the policy’s effectiveness I think we need to clearly look at what areas we want to target more ― in other words, applying some selective targeting scheme,” he said.

As an example, Lee honed in on Park’s proposal to universalize the old-age subsidy as insufficient to keep many elderly out of poverty.

“So in that case, I would say we need to put more resources, first, into those people who are below the poverty line so you at least take care of the poverty problem for the elderly instead of giving 100 percent universal (coverage).”

Others, such as Jun, reject the idea of choosing between universal and selective models at all.

The next government should focus more on the poor families, higher taxes on the rich, more tax money for those who have next to nothing. Also there should be a thorough investigation on all those who scam the government and schools for money by manipulating the system to their advantage.

I am astounded that speed limits within built-up areas in towns or cities are rarely observed or policed. I have observed many accidents related to speed since being in this country now for just over a year. Koreans are in too much of a hurry in their cars or motorbikes. Also, cars and motorbikes appear to have no respect for pedestrians and any rules around pedestrian crossings seem to be rarely adhered to. I have had several of my own experiences where cars have not respected my right to cross on a pedestrian crossing even when I have the green pedestrian signal.

Often cars ignore the fact that pedestrians have the right of way on pedestrian crossings. Also, I have seen police totally ignore offending vehicles in this situation. Do the police have no teeth or do they not care? The other dangerous situation concerns the motorbike couriers and riders who travel on the footpath. Is there a law in Korea that says that motorbikes are allowed on footpaths?

I frequently drive in Thailand, Vietnam and Cambodia where the traffic is legendary; however, I think it’s worse in Korea simply due to culture. In Thailand you don’t hear horns honking non-stop and people will let you in when trying to merge, etc. The “ppali ppali” mentality makes this place dangerous, particularly with the bus, taxi, tow truck and moto drivers who act like nobody else is on the roads. Can you fix it? Only if you crack down on those drivers first, in my opinion.

It’s pretty simple. Enforce the traffic laws. There’s a reason why so many people run red lights and drive on sidewalks.

Traffic fatalities have halved since a high of 12,000 a year in the late ‘90s. This despite 10 million more cars on the road.

The auto, ship and semiconductor industries account for most of the exports from Korea, which lacks natural resources such as oil. But the process of making a car is operated by software, and semiconductor chips in our smartphones, which have become must-have items, are also produced by software. Software provides a foundation for all industry, even the education and medical sectors. Its importance goes without saying.

Then, how can the software industry be boosted? Taking close a look of software’s features offers us a solution to this question.

Unlike hardware, software is easy to copy. If you ask someone to make the same piece of hardware, it is impossible for that person to make the same thing without the appropriate machine. But it’s different when it comes to software. Anyone familiar with a computer will have no difficulty copying it.

In talking about people having a personal computer, almost all of them have one or two computer game program on their PC. But few talk about buying such games. Most have downloaded the program and shared it with other people on the internet, with some even boasting of their skill in not being caught. To help you understand more easily, let me explain the cycle in a non-specific industrial field. In most industry, the investment is made in research and development first. Next, based on these result, the product is produced. And selling the product to customers makes money. That profit is re-invested in R&D. As a result, the economy of the country and the level of its people progress.

But if we don’t pay the price of usage of the program so that it blocks this process, what happens? On this account, the government must to tighten control over illegal downloads and illegal attribution.

It is certain that no matter how rigorous the government may be in its controls, it is not easy to monitor. We the people must change our conception of what is free. If a precedent is not set, it’s hard to imagine software industry’s development.