[ The Korea Herald – Send E-mail ]
[Newsmaker] Tragic death of online activist Aaron Swartz
By Korea Herald
Published : Jan 13, 2013 - 20:41
Updated : Jan 13, 2013 - 21:09
A dreadful, if not downright scary, scenario is the end of free content on the Internet. What if you had to pay a fee for each and every piece of digital content you browsed on the Web? What if there were no Wikipedia, and no free news feeds from tens of thousands of media outlets?

Aaron Swartz, a pioneering programmer, envisioned a cyberspace where online content is freely available. But before his vision was realized in full, he tragically ended his life at the age of 26, U.S. authorities confirmed Saturday.

The name of Swartz may be unfamiliar to Korean readers, but many online users here benefit from his brainchild ― RSS, or online feed formats used to publish frequently updated content such as blog entries and news headlines in a standardized form.

RSS represents the core part of Swartz’s belief that everyone around the world should be allowed to freely download and enjoy online content. In recent years, the vibrant growth of the blogosphere fueled the adoption of RSS by bloggers, news outlets and ordinary online users. It’s simple, efficient and, best of all, free for everyone. 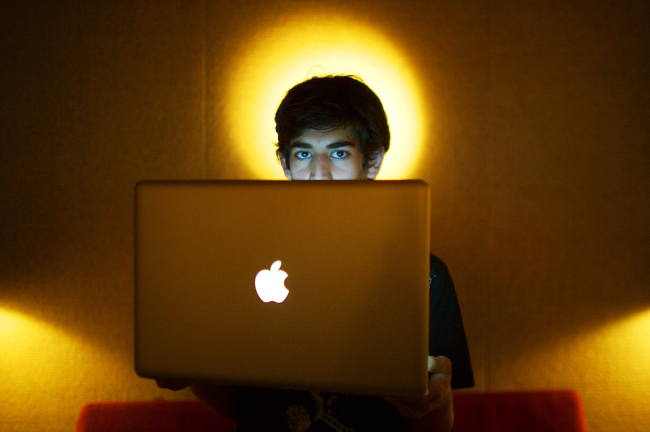 Internet activist Aaron Swartz in 2009. (AP-Yonhap News)
Swartz, a cofounder of social news website Reddit and described as “an extraordinary hacker and activist,” hanged himself in his Brooklyn, New York, apartment. He had been due to face trial on charges of stealing millions of journal articles from JSTOR, a paid service used by Massachusetts Institute of Technology that offers digitized copies of articles from academic journals.

Prosecutors said he intended to distribute the articles on file-sharing websites in violation of the law, but some legal experts in the U.S. say the case against Swartz may be unfounded.

JSTOR announced this week it would make more than 4.5 million articles publicly available for free. It also posted on its website a short note of condolence over Swartz’s death: “He was a truly gifted person who made important contributions to the development of the Internet and the Web from which we all benefit.”