Democrats continue the tradition of nominating a Republican to oversee the Pentagon, but don’t expect Democratic lawmakers to greet Hagel as one of their own. Nor is the Midwestern maverick expected to enjoy support from his former GOP colleagues. 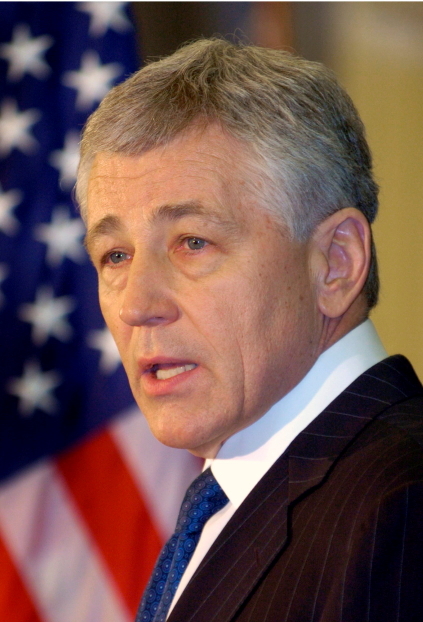 Chuck Hagel
One thing is for sure. Hagel will face a tough slog when Senate confirmation hearings start. Hagel would be the first enlisted soldier and first Vietnam War veteran to head the Pentagon.

Korean domestic political observers might see something familiar in the fighting at the Capitol; after all, partisan politics in the U.S. are as pugnacious as they are uncompromising.

Hagel has supplied ample ammunition for Republican ire over the years. His toughest questions will not be from liberal stalwart Sen. Chuck Schumer of New York, but rather from the conservative senator from South Carolina, Lindsay Graham.

Hagel upset his Republican “friends” by donating to Democratic campaigns in close elections. He endorsed Democrat Bob Kerrey in a high-profile and contentious 2011 race.

Hagel’s positions on social issues have arced toward the left, too. Although he was opposed to abortion in the past, Hagel began moderating that opposition over the years, saying he is okay with abortion in cases of incest or when the mother’s life was in danger. Hagel also said he could support an assault weapons ban “under certain conditions” and depending on which weapons are banned.

Hagel’s foreign policy views are the worst of all for conservative purists. While Hagel supported the war in Afghanistan and in Iraq in 2003, as well as the Patriot Act, he soon turned from being a supporter to one of the sharpest critics.

Despite the partisan and in-party brawling, if Hagel is finally confirmed by his former colleagues in the Senate, he faces an even more daunting task ahead overseeing a shrinking Pentagon.

That’s because the war in Iraq has already wound down as troops continue trickling home. If the Obama administration sticks to a 2014 time table for Afghanistan, some $500 billion in cuts in defense over the next 10 years are in the offing, and some expect even more as Congress faces successive budget crises.

As the Pentagon pie sees more and more future cuts, this Senate confirmation will seem like a small skirmish by comparison.