Park and transition officials held a launch ceremony in their headquarters in central Seoul amid tight security.

“I hope the transition committee will work with a sense of responsibility. Do your best to become the most exemplary transition team,” she was quoted as saying during the panel’s first official meeting after the ceremony.

The process of finalizing the committee lineup and the launch has taken longer than past cases, with Park only finalizing the members on Friday, 15 days after the election or about 10 days later than the timing of President Lee Myung-bak’s transition committee in 2007.

The structural changes for the government are expected to be announced toward the end of the month, and the ministerial candidates are likely to be announced early next month. 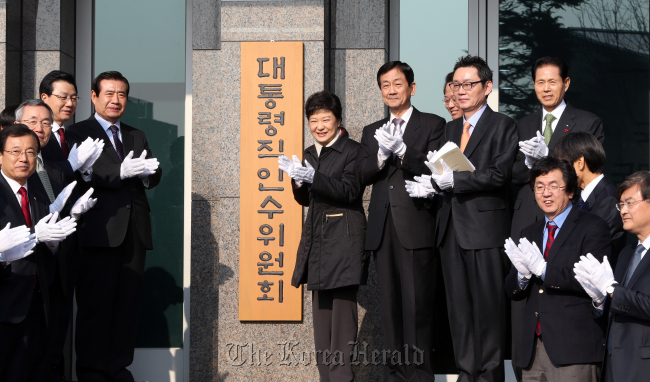 President-elect Park Geun-hye and her transition committee members including deputy chairman Chin Young (sixth from left), chief spokesman Yoon Chang-jung (eighth from left), people’s grand unity committee chairman Han Gwang-ok (fourth from left) and inauguration preparatory committee chairman Kim Jin-sun (third from left) take part in the launch ceremony in Seoul on Sunday. (Park Hae-mook/The Korea Herald)
For the post of prime minister, the president-elect is reported to be looking for an individual who not only shares her vision but also holds appeal to the opposition parties, raising speculations that an individual from the Jeolla region will likely be her first choice.

Despite the comparatively drawn out selection process, the transition committee is said to already have a number of issues under review.

According to sources, the committee is reviewing plans to establish an independent body for managing high-level appointments as part of Park’s plans to shield related matters from the influences of the president and others close to the center of power.

If those plans are finalized, a body similar to the Civil Service Commission that was abolished under the Lee Myung-bak administration could be established.

In addition, the transition committee is said to reviewing plans to set up a presidential committee to oversee welfare policies.

Under the current system, about 290 welfare programs are overseen by different government ministries.

“Plans to establish the (committee) as a presidential organization, and the president personally taking the chair are under consideration,” an anonymous transition committee official was quoted as saying by a news agency.

For the transition team, however, drawing up plans for the incoming administration will not be the only task.

The ruling party and the president-elect have already earned the criticism of the main opposition Democratic United Party for developments concerning the transition committee.

Since being elected on Dec. 19, Park has for the most part remained away from the spotlight, and has maintained high level of security with regards to her personnel decisions.

Park’s decision to keep her choices to herself until the last possible minute incited heavy criticism from the DUP that termed the process “enclosed appointment” referring to the level of secrecy surrounding her choices.

A number of individuals selected for key positions have also been subject to criticism beginning the decision to give the post of chief spokesman to right-wing pundit Yoon Chang-jung.

In 2006 Park Hyo-chong, the head of the transition team’s political affairs subcommittee, served as a co-representative of the conservative group Textbook Forum. At the time, Park Hyo-chong is said to have assessed the 1961 coup led by the president-elect’s father Park Chung-hee as being “a coup as well as a revolution.”

Along with the SNU professor, Sungkyunkwan University professor Yoo Min-bong’s appointment as a representative of the subcommittee for the planning and coordination of state affairs also aggravated the DUP for his connections to the new right movement.