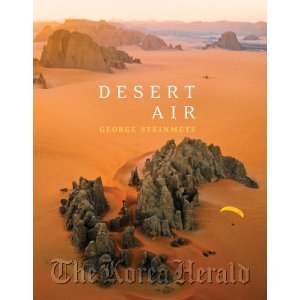 ‘Tis the time of year for coffee table books and, for the adventuresome, there is nothing better than “Desert Air.”

World-class photographer George Steinmetz who worked for National Geographic and GEO Magazine has published a number of his finest photographs in a book that is only just big enough to hold their subjects.

He was fascinated with the hyper-arid regions ― “areas that get less than four inches of annual precipitation.” Seated in a motorized paraglider, he glided over deserts and cities taking photographs. They become a record of time and place.

Gliding over the ruins of the city of Masada, in Israel, you see the dry desolation of the land around it. It was here that a group of Jews held out against the Romans who ended up building a ramp to attack the cliff-top city only to find the inhabitants had committed suicide.

In Chinguetti, Mauritania, a UNESCO Heritage site, the Saharan sands are slowly burying the city, started in the 12th century and known for its libraries and mosques. From the air it looks like a half-excavated archaeological dig.

Nothing was simple. “Going on such trips would require a lot of sacrifices, such as long absences from my wife, who has a career of her own, and our young family,” says Steinmetz. “The proposal writing and field planning for each trip took many weeks of effort. ... And once I got in the field, the journey itself was even more grueling. In pursuit of these images, I went through five motors, four paragliders, and nine pairs of hiking shoes.”

He was also injured. One of his paragliders hit a tree in China giving him a wound that took seventeen stitches. Among rough landing was into the Pacific Ocean. Walking across a lava lake, he plunged through the crust. His boots filled with “scalding acidic water up to my knees.”

In Iran, the team ran afoul of international tensions. Wildlife tested his patience in Arizona’s Sonoran desert when his camera strobe lights scared the sheep but gave him a priceless photo of a female mountain lion at the edge of a stream.

In the introduction, he writes that he discovered the deserts weren’t just dried sand and arid land. “I quickly learned that these ‘barren wastelands’ are actually extremely fragile ecosystems undergoing rapid change.” He says that while climate change was part of it, most changes came from the hand of man.

“Desert Air” covers deserts, lava lakes, the icy mountains of the Andes and the oases of the Sahara. It took fifteen years to complete and visits to thirty countries. It’s a beautiful book worth looking at for a long time. (MCT)