“The era spent at Gwacheon was one of passion and devotion, and we are overcome with emotions as we prepare to let go of this era,” said a nostalgic Finance Minister Bahk Jae-wan, who will be the last minister to have experienced the Finance Ministry in Gwacheon City.

It will take over 300 5-ton trucks to deliver the goods down to Sejong, and in terms of people, the ministry’s move will affect the lives of over 1,000 employees. 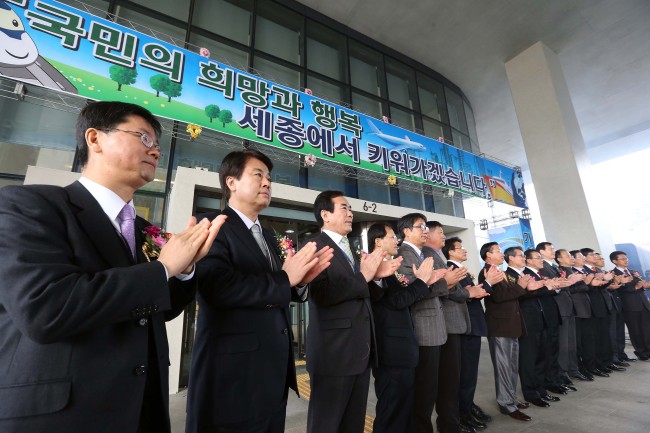 Land Ministry officials applaud during a ceremony to move into the new government office in Sejong City, South Chungcheong Province, on Monday. (Yonhap News)
It will be the first time in almost 30 years for the ministry to leave the government complex where most of the nation’s key ministries, with the exception of a few such as the Foreign Ministry and the Prime Minister’s Office, had been clustered.

Gwacheon is where Korea’s national policies get shaped, and it has borne witness to the comings and goings of some of the most high-profile officials as the country navigated through ups and downs, both in the political and economic arenas.

The Agriculture Ministry, the Prime Minister’s Office and the Fair Trade Commission have already moved south to Sejong where the government is creating a new administrative capital, but the Finance Ministry is one of the most heavyweight ministries to finally make the move.

Doubt and worry continue to plague the public servants who followed with their jobs.

“I never thought my workplace would be moved somewhere else than Gwacheon,” said one official who declined to be named.

He was not alone. At least the officials have a place to stay. For the temporary employees, such as the maintenance, many have no option but to look for new jobs since they can’t afford to relocate.

Building Sejong City as the nation’s administrative capital was one of the late President Roh Moo-hyun’s policy pledges and along with the free trade agreement with the United States, it is arguably one of the most controversial to have been realized.

Despite the lingering concerns, officials tried to be positive.

Kwon Do-yup, the minister of land, transport and maritime affairs, said of his ministry’s move to Sejong, that the ministry will “do everything it can do make sure the new days in Sejong live up to and beyond the reputation of Gwacheon.”