[ The Korea Herald – Send E-mail ]
[Newsmaker] Samsung Electronics stock on record rise
By Korea Herald
Published : Dec 10, 2012 - 20:26
Updated : Dec 10, 2012 - 20:28
Shares of top smartphone maker Samsung Electronics are getting ready to break the 1.5 million won mark as the Korean IT behemoth is gaining an edge in its ongoing global patent battle against Apple Inc. 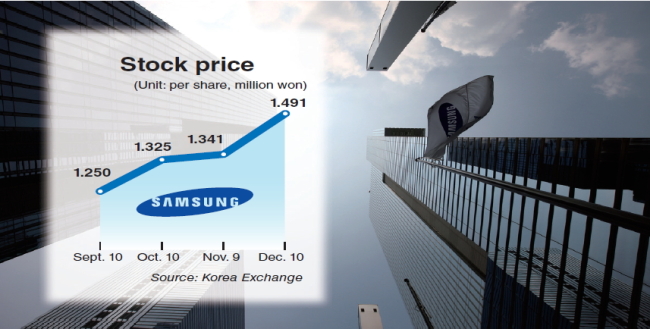 Samsung Electronics’ shares were traded in the 1.4 million won range only about 12 days ago. Its price closed at around 1.49 million won per share on Monday.

The benchmark Korea Composite Stock Price Index also increased up to 1,970.19 points soon after the market opening, but closed at 1,957.42 points on Monday.

Last Friday, it was reported that Samsung may walk away paying less in damages ― possibly by more than $600 million ― for infringing some of Apple’s most critical patents.

Judge Lucy Koh of the San Jose court said the jury that delivered the $1 billion verdict was precise and consistent in calculating infringement damages for 28 different Samsung products, but that the method used may have been mistaken.

Earlier in August, a nine-member jury at the San Jose court reached a verdict that Samsung must pay $1.05 billion to Apple for copying six of the U.S. firm’s patents.

Local analysts offered a positive outlook involving the stocks of the nation’s No. 1 electronics manufacturer as its shares is on a rising streak.

“It’s possible that the IT industry will improve next year and the U.S. consumers are likely to buy more IT products. As a result, the rising streak of Samsung Electronics is projected to continue in the following year,” said Shinhan Securities global strategist Gwak Hyun-soo.