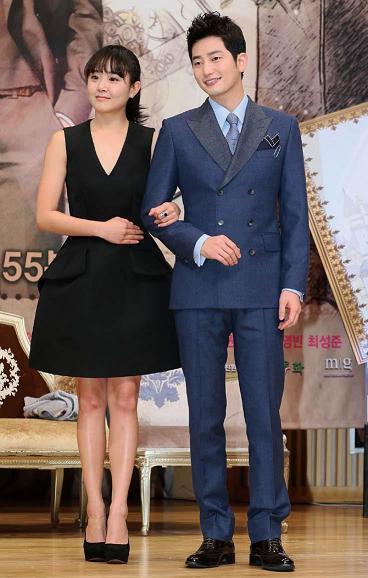 Actor Park Si-hoo (right) and Moon Geun-young pose at the press conference at SBS Hall in Seoul on Tuesday. (Yonhap News)
After a string of successes including hit dramas “Iljimae” and “The Princess’ Man,” actor Park Si-hoo is now trying out a new role as a wealthy, successful but petty-minded businessman in the upcoming SBS drama, “Cheongdam-dong Alice.”

The romantic comedy is about a struggling young designer facing devastation and challenges after meeting a wealthy, arrogant businessman in Cheongdam-dong, one of the most affluent districts in Seoul. Alongside Park, acclaimed actresses Moon Geun-young and So E-hyun as well as actor Kim Ji-suk will join the cast.

“My role as Jeong-jo, the youngest CEO in the luxury-brand market, may seem like a typical character of a wealthy man, but there are some funny twists to him,” Park said during a press conference held at SBS Hall in Mok-dong, Seoul, on Tuesday.

The actor, hailed as one of the so-called hallyu stars after a run of small-screen success, expressed his love for his new role. “Though he may seem like an independent, successful businessman, a dark side remains: He holds a strong antipathy toward ‘gold diggers’ and women obsessed with luxury-brand products. He also tries to get back at people who he thinks have hurt him. He’s a typical ‘loser.’”

Moon also expressed hopes for the drama. “My character is not pretentious or nave. She is frank about what she wants and is not afraid to show it to others,” she said.

The production crew explained that the drama depicts the lives in Cheongdam-dong including the splendor and vanity of the “Beverly Hills of Seoul” in the most realistic ways. “We will question the terms of endearment through the youths living the life of dreams. We hope the viewers will ask themselves: Is wealth everything we need? Are we happy now?” said Kim Jin-hee and Kim Ji-wun, writers of the drama.

“Cheongdam-dong Alice” is slated to air on SBS on Saturdays and Sundays beginning Dec. 1.