[ The Korea Herald – Send E-mail ]
[Herald Interview] The man behind musical ‘Aida’
Theater director Keith Batten shares his experience staging musicals around the world
By Claire Lee
Published : Nov 14, 2012 - 20:08
Updated : Nov 14, 2012 - 20:10
Theater director and artist Keith Batten knows what it means to work overseas, especially when it comes to staging some of the most popular musicals in the world.

He has directed over 60 productions, including Elton John and Tim Rice’s musical “Aida,” and the Broadway production of “Spiderman,” in 12 countries around the world.

His last visit to Seoul took place back in 2005, when he was in charge of directing the local production of “Aida.” The musical, which tells the story of Aida, Nubia’s princess who gets taken into slavery in Egypt, was a great hit in Seoul -- raising 15 billion won ($13.8 million) in ticket sales.

Ok Ju-hyun, who had been largely regarded as an pop star, rose to stardom in the local musical scene by playing the lead role in the eight-month run. The show had a successful re-run in Korea in Seongnam, Gyeonggi Province, in 2010.

Batten is in Seoul again for the show’s third run in Korea, which will be held at D-Cube Arts Center in Seoul from Dec. 2 to April 28, 2013. The theater director is an expert in this show: He’s done it in the Netherlands, Germany and Japan. Some of the performers he has worked with on the show include Toni Braxton, Michelle Williams and Deborah Cox and Korea’s Ok Ju-hyun. 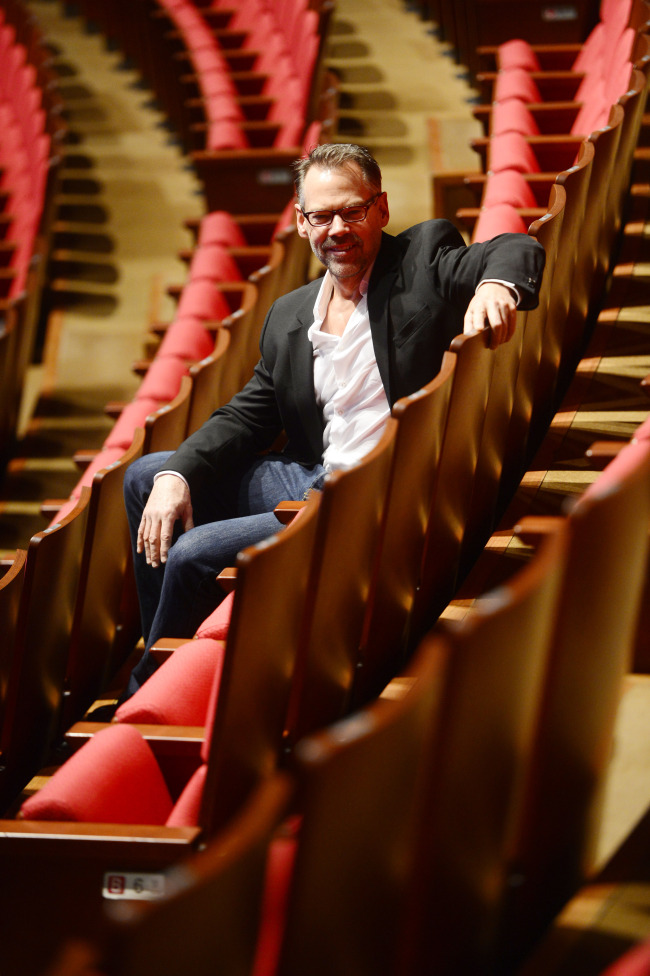 Theater director Keith Batten poses for a photo during an interview with The Korea Herald at D-cube Arts Center in Seoul, Tuesday. (Park Hae-mook/The Korea Herald)
Batten, who also works as a visual artist, talked to The Korea Herald about directing “Aida” in Korea and other countries, his dual career in theater and art, as well as some of the best things about his job.

KH: How does your experience as an artist influence your works as a director and vice versa?

Batten: They are both all about visualizations. For example, when I’m staging a scene with my actors in an empty room, I see the whole thing, the whole picture that they are in. When I’m doing an artwork, I have to visualize it first before I put it on a paper. It’s just a different medium.

KH: What do you think makes “Aida” so popular?

Batten: First of all, it’s the music. It’s Elton John. People love it. When the original cast’s recordings came out, it was one of those recordings you could play over and over again because everybody loved all of the songs. And it’s got a really great story; even thought it’s about ancient Egypt, it’s about a lot of other things, too. It’s the drama of it, and emotion of it that people love -- because that’s what musicals are really about.

KH: Ok Ju-hyun, who played Aida in the first Seoul run in 2005, has grown into one of the most popular musical actresses here.

Batten: I remember when she came in (for the audition back in 2005), she had to come in covered up because her fans were outside obsessing over her. We had covered up this room we were in, and we had to cover the windows up. And I remember when she was singing I could see all of these feet along the bottom of the windows, realizing people are all peeking in through the cracks.

It was a risk too. I thought “we’ll see what happens,” but we didn’t know if she could step up (from being a pop star). During our first rehearsal, she was very smart, writing everything down, and very quiet. She was lovely to work with, but we didn’t know what she was going to deliver. And I remember when we did our first TV appearance during our rehearsals, and she got out there. All of the sudden I thought wow, she’s really going to be able to do this. She turned it on as a performer. She was processing as an actress, though she didn’t understand everything about it. She instinctively knew a lot.

Then we got into run-throughs, and I thought, she’s really going to be something. But we didn’t know that in the beginning and it was really risky to take a chance on her. And it was so great a couple of weeks ago to go to the Korean Musical Awards and see her win for her performance in “Elisabeth.” It was really moving -- all these years later to see what she’s turned into.

KH: Tell us about Cha Ji-yeon and Sonya -- who have been double cast as Aida for the upcoming run.

Batten: I remember Cha came in for 2010 audition for the second run in Korea. At that time, she had just done “Dream Girls.” And I thought she must be something if she could sing Effie for “Dream Girls.” She didn’t end up getting the role because Ok did a re-run as Aida that year. When she came in for the upcoming run’s audition, I thought wow, she’s really grown. She’s got a really great soul and a real power. The same with Sonya. They are both very unique talents.

KH: What’s your experience with the Korean audience like?

Batten: When I did “Aida” in Seoul back in 2005, it was one of the best experiences I had doing the show just because there’s this special connection to the Korean people with the show. People here got it in a different way. It was something about the history of the people here, but also the culture, and the ideas of reincarnation. And people just understood it in a different way. So that was really wonderful.

KH: You have been working for this show for such a long time. Do you ever get sick of the songs?

Batten: No. It’s just a great show. It’s wonderful to revisit it again and see how well it works. After doing it over and over again, I now get to see it more objectively. And I just realize this is really well written as a musical. The design of this production is also so fantastic. Bob Crowley, who did the set and the costumes, just won the Tony Award for “Once.” And Natasha Katz, who did the lighting, won the Tony Award for this ad also for “Once” as well.

You don’t get sick of it when it’s really good. And you are working with the best people in the business. They are with you while you are doing it. Everything about the music is there for a reason, and everything in the script is there for a reason. You are breathing life into it again but you can’t help to be inspired if it’s a good work to begin with.

KH: You are working with prominent Korean musician Colleen Park for the show.

She is one of the reasons why I enjoy working in Korea so much. She’s so talented and is a wonderful person. She’s Korean and she’s also American and brings a wonderful connection and different perspectives.