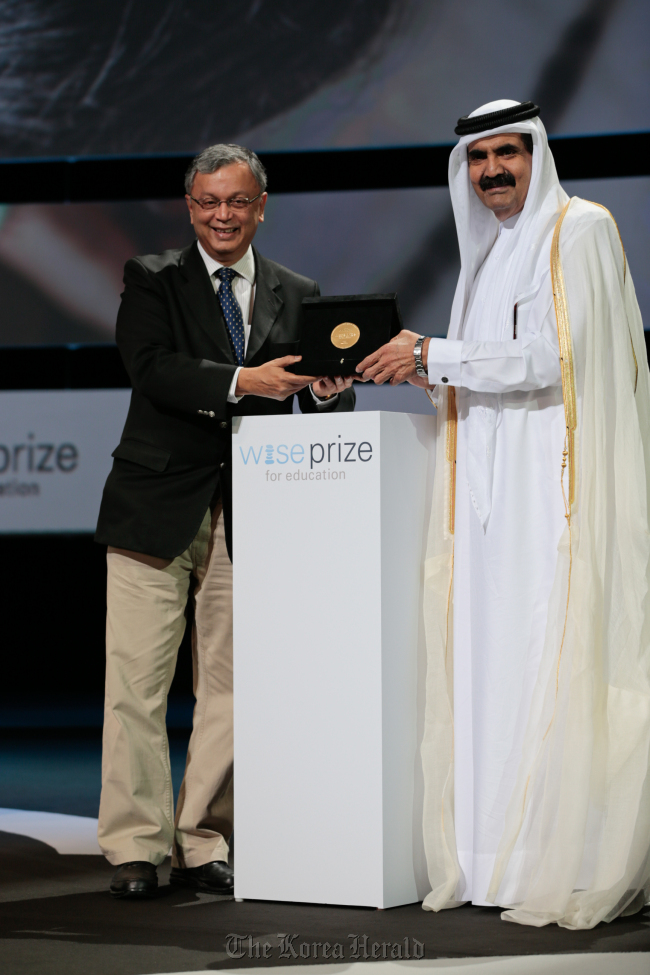 Madhav Chavan of India receives the 2012 WISE Prize for Education from Emir of the State of Qatar Sheikh Hamad bin Khalifa Al Thani on Tuesday in Doha. (WISE)
DOHA, Qatar ― More than 1,200 education leaders from 100 countries gathered in Doha on Tuesday for an international forum to discuss how to collaborate for future development in education.

The resource-rich state has been spending hundreds of millions of dollars on developing an education system that will secure the country’s economic future when its natural resources run out.

Marking its fourth year, the World Innovation Summit for Education has evolved into a major international gathering, bringing together leaders and decision-makers from around the globe as well as international organizations, such as UNESCO and the United Nations.

Under the theme of “Collaborating for Change,” the three-day summit explores “how collaboration in many forms can inspire in education,” through interactive discussions with speakers, experts and members from the WISE community, according to its organizers.

Among the themes will be finding ways to provide better futures for the 61 million children in the world who do not even get a basic primary-level education.

The annual event also gives out an award with a prize of $500,000 every year to honor individuals or organizations for innovative practices in education.

This year’s WISE Prize for Education, announced on Tuesday at the summit, was awarded to Madhav Chavan of India in recognition of his efforts in providing lessons in literacy and numeracy for millions of impoverished families in the country.

WISE was inaugurated in 2009 by Qatar Foundation on the initiative of Sheikha Mozah bint Nasser, wife of the Emir of Qatar.