The inhabitants of the U.S. territory are already U.S. citizens, but statehood would give the island’s 4 million people the right to vote in the presidential election and representation in the Senate and House of Representatives ― something already enjoyed by the 5 million Puerto Ricans living on the U.S. mainland. 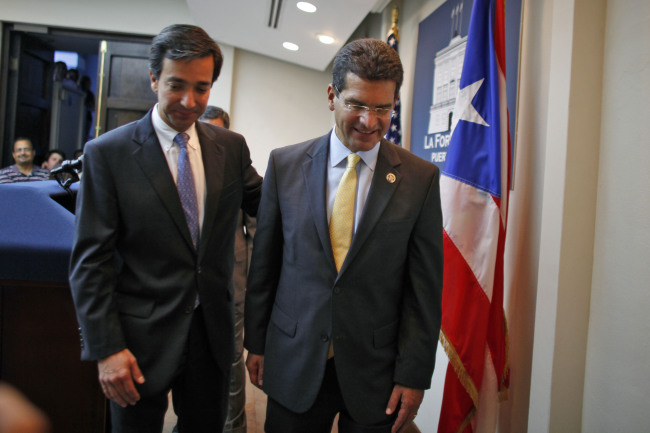 Pedro Pierluisi (right), Puerto Rico’s representative in U.S. Congress, is accompanied by Puerto Rico’s Gov. Luis Fortuno at the end of a news conference in San Juan, Puerto Rico, Wednesday. (AP-Yonhap News)
Puerto Rico Secretary of State Kenneth McClintock argues that the fact that more Puerto Ricans live on the mainland than on the island points to one reason for the change in results: the economy.

Obama said he would support the will of the Puerto Rican people, but the switch to statehood would require the approval of Congress ― a tougher test.

But Puerto Ricans have voted to get rid of one of statehood’s most significant advocates, Republican Gov. Luis Fortuno. His replacement, the Popular Democratic Party’s Alejandro Garcia Padilla, opposes the move.

The numbers involved in the statehood referendum itself have also raised questions about how Puerto Ricans feel about the issue.

The vote was made in two parts. The first question asked whether voters wanted a change in status and the second, what alternative status the voters wanted ― statehood, increased autonomy or independence.

A clear majority voted in favor of a change in status in the first vote and for statehood in the second.

But while 1.3 million people voted for a new status, only 900,000 voted for a change at all, leaving room for those against the status to contest the validity of the second result. Some have argued that those who voted against a change in the first vote should be considered as against statehood in the second, which would put pro-statehood votes in the minority.

As it stands, the new governor, who favors the current status, has pledged to hold another referendum after a constitutional assembly on the issue is held in 2014.

While this may well be carried through in an attempt to undermine Tuesday’s vote, greater clarity on how Puerto Ricans feel about the issue might be necessary.