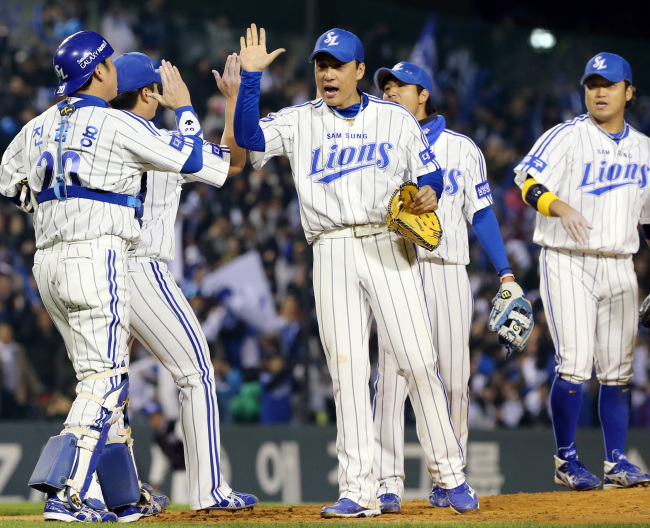 Samsung players cheer as they crash SK by 2:1 on Wednesday in Jamsil Stadium in Seoul. (Yonhap News)
The Samsung Lions squeezed past the SK Wyverns 2-1 Wednesday to get to within one win of the South Korean professional baseball championship.

In Game 5 of the Korean Series at Seoul's Jamsil Stadium, the Lions scored early on SK's shaky defense and held on for dear life to take the 3-2 series lead in the best-of-seven affair.

The Lions can clinch their second straight title, and sixth overall, with a win Thursday night back at Jamsil.

The Lions got the first run in the bottom of the first. After a pair of one-out singles put runners on the corners, SK starter Yoon Hee-sang threw a wild pitch to allow Jung Hyeong-sik to score from third.

The Lions took a 2-0 lead in the bottom third. They had runners on first and third after two singles and an SK error, and Park Han-yi hit a grounder to short to score Lee Seung-yeop from third.

Shortstop Park Jin-man tried to throw home but he couldn't get the ball out of the glove in time to make the play.

The Wyverns got one back in the top fourth thanks to three consecutive singles, capped off by Lee Ho-joon's RBI hit to right.

Later that inning, the Wyverns had runners on the corners with two outs, but Lee Ho-joon was caught in a rundown between third and home on a botched double steal attempt.

The Wyverns wasted another scoring chance in the top seventh.

With no out and runners on first and second, Kim Kang-min and Park Jin-man struck out against Samsung reliever Ahn Ji-man, and pinch hitter Lee Jae-won grounded out to short.

SK had one final rally in the top of the ninth. Choi Jeong led off with a triple off the centerfield wall and Park Jung-kwon drew a one-out walk. But Kim Kang-min went down swinging and Park Jin-man struck out looking against closer Oh Seung-hwan, who recorded the final four outs for his second save of the Korean Series.

Samsung's starter Yoon Sung-hwan pitched six innings and gave up a run on five hits to earn his second win of the series. His SK counterpart, Yoon Hee-sang, scattered five hits over seven innings but allowed two runs for the loss.

Left-hander Jang Won-sam will start Game 6 for the Lions, and the Wyverns will send right-hander Mario Santiago.

After playing two games apiece at their respective homes, Daegu and Incheon, the Lions and the Wyverns will finish out the Korean Series at the neutral venue of Jamsil.

Under a KBO rule designed to draw more fans, if a team with the home field advantage in the Korean Series plays at a park with a capacity smaller than 25,000, Games 5 through 7, if necessary, come to Jamsil, which seats 26,000 in the country's biggest market.

The Lions hold the home field thanks to their first-place finish in the regular season. They served as the home team and batted last in Game 5 and will do so again in Game 7, should the clubs go the distance.

Their home park, Daegu Baseball Stadium, holds only 10,000, according to the KBO. (Yonhap News)