The island officials expect the number will reach over 600,000 by the end of the year. The number of foreign and Korean visitors is expected to be 2.5 million. 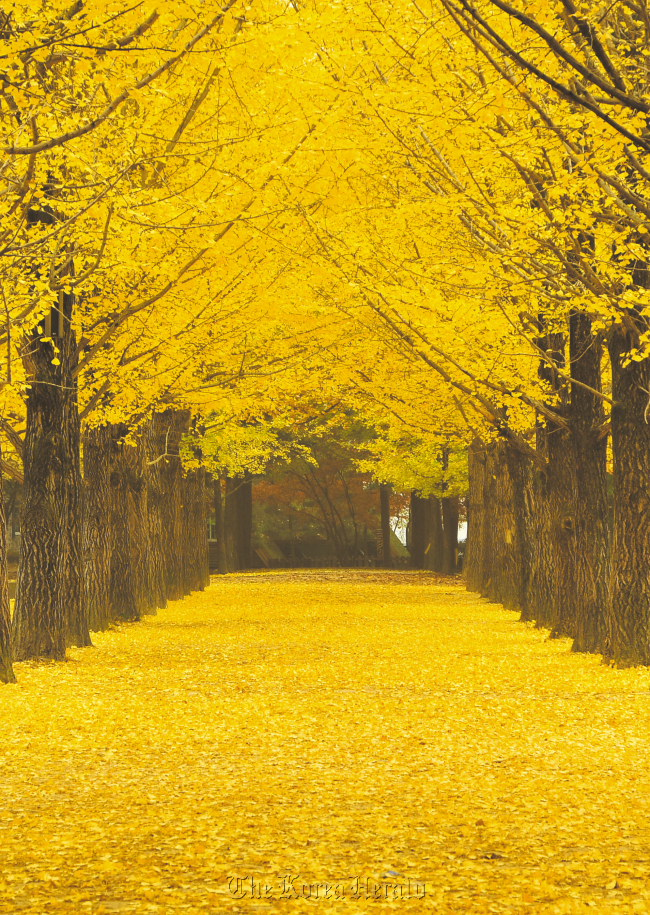 A gingko tree-lined path on Nami Island. (The Naminara Republic)
Of the foreign visitors, those from Southeast Asian countries such as Thailand, Taiwan and Malaysia make up the majority.

Once a small island created as a result of the construction of Cheongpyeong Dam in 1944, Nami Island today boasts a beautiful landscape surrounded by Bukhan River. And it appeals to foreign tourists through nature, such as the changing colors of leaves in autumn.

“Nami Island creates a mystical atmosphere with nature,” said Minn. “And Southeast Asian tourists love to watch the changing leaves because they can’t see it in their countries.”

“It’s not something we created, but what we have always had. And making it into a travel program really worked well,“ he added.

The island also aims to create a comfortable, yet exotic atmosphere for tourists. Flags from foreign countries are hung around the island and music from the visitors’ countries are played. For Muslim tourists, a prayer room is available and Halal food is served at restaurants.

The island first emerged as a popular travel destination among Japanese tourists who were attracted by the famous scene from the Korean TV drama “Winter Sonata,” shot on the island.

But now it has emerged as a global travel destination for its cultural and artistic charms combined with the serene nature.

It recently “declared” cultural independence and invented its own passport, currency and stamp, naming the island “The Republic of Naminara.”

It also spearheaded the establishment of a regional tourism network of nine provincial governments in Korea to promote diverse tourism in the country.