Lee Shi-hyung, 34, will be greeted by an army of TV cameramen, photographers and journalists anxious to catch the moment the president’s son faces the music.

Confronted by the special investigative team, which his father reluctantly agreed to, he now must fight to clear his and his father’s name in a corruption scandal that Lee’s liberal foes are salivating over ahead of the December presidential election. 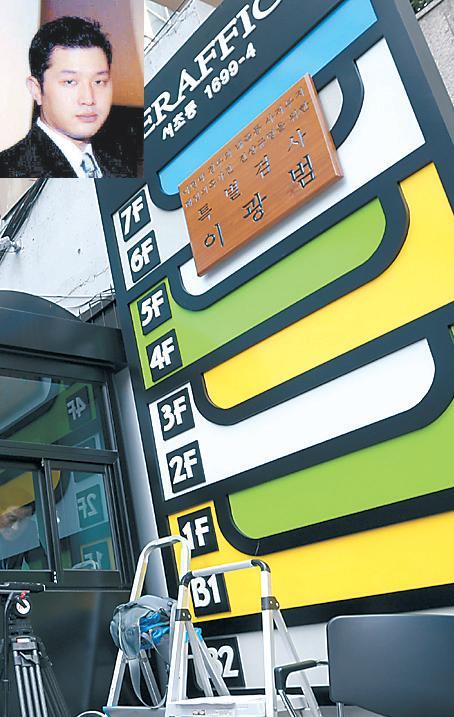 President Lee Myung-bak’s son Lee Shi-hyung (inset) and the outside of the special counsel’s office. (Yonhap News)
“Lee Shi-hyung will be treated as a suspect, (not as a witness),” a member of the team said Wednesday on condition of anonymity.

In May 2011, Shi-hyung bought a plot of land in Naegok-dong on the southern edge of Seoul jointly with the presidential security service where President Lee planned to build a retirement home and security facilities.

The junior Lee, who in 2008 reported his assets to be only 36 million won ($32,600), paid 1.12 billion won for the land. The Presidential Office later explained that the son had borrowed 600 million won from a bank, using his mother’s share of the residence in Nonhyeon-dong as collateral, and the rest from his uncle, Sang-eun.

Accusations against him include breaking a law on the use of real names in property transactions and a much more serious one that he and the presidential security office divided the cost of the land in a shady deal that allowed the junior Lee to pay less than what his share was actually worth.

Local reports suggested Wednesday that Shi-hyung may have done what his family told him to do and that he may have not been fully aware of what he was involved in.

Koreans have seen before how presidents’ children have gone astray in a life of power, privilege and pressure. Yet the predicament of Lee Shi-hyung doesn’t seem wholly of his own making.