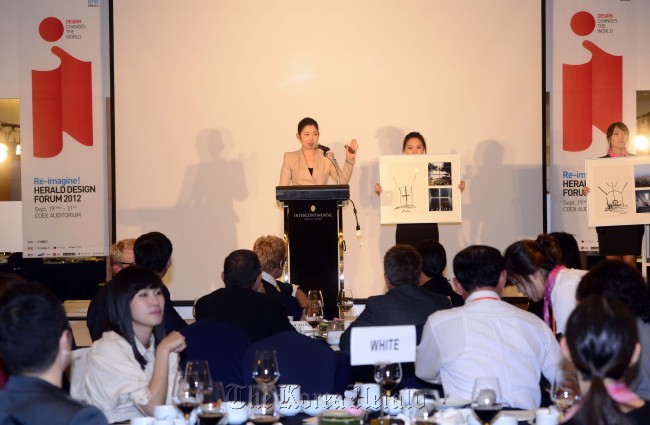 The sale held along with dinner for VIPs presented a total of four sketches: a drawing of animals by former automobile designer Chris Bangle, a car sketch by design chief of KIA Motors Peter Schreyer and two architectural sketches of Japanese architect Tadao Ando.

“We are happy to have Bangle and Schreyer who are present here today and I felt a great passion from audience,” said Lee Young-man, CEO and publisher of Herald Corporation, who hosted the forum. Ando was not present at the auction event.

The auction started with Bangle’s drawing of different animals such as a mythical animal unicorn and a fox, each representing own meaning in design.

“This fox is pretty when its tail is pretty. Your (design) company brings good things into the world, not just making money (just like) how the tail around it makes it look good,” said Bangle.

Bangle’s drawing sold to Choi Jung-hwi, president of Cheonbo Natural Food, who made the bid to give it to his daughter as a present.

“I selected Chris Bangle’s sketch to give it to my 8-year-old daughter, who wants to become a designer. I think Bangle is the person who will be studied by many when my daughter becomes an adult,” said Choi.

Peter Schreyer’s car sketch was sold to an anonymous bidder.

The most contested piece was Ando’s “Church of the Light” sketch and photos of the architecture, sold at 5.2 million won.

Ando’s sketch of the Church of the Light located in Osaka, Japan, is one of his signature architecture works, in which light creates the harmony between nature and the building.

Ando’s other sketch of Chikatsu-Asuka Historical Museum was auctioned.