South Korean rapper PSY's ``Gangnam Style'' video has more than 200 million YouTube views and counting, and it's easy to see why. No Korean language skills are needed to enjoy the chubby, massively entertaining performer's crazy horse-riding dance, the song's addictive chorus and the video's exquisitely odd series of misadventures.

Beneath the antic, funny surface of his world-conquering song, however, is a sharp social commentary about the country's newly rich and Gangnam, the affluent district where many of them live. Gangnam is only a small slice of Seoul, but it inspires a complicated mixture of desire, envy and bitterness.

Here's a look at the meaning of ``Gangnam Style'' _ and at the man and neighborhood behind the sensation: 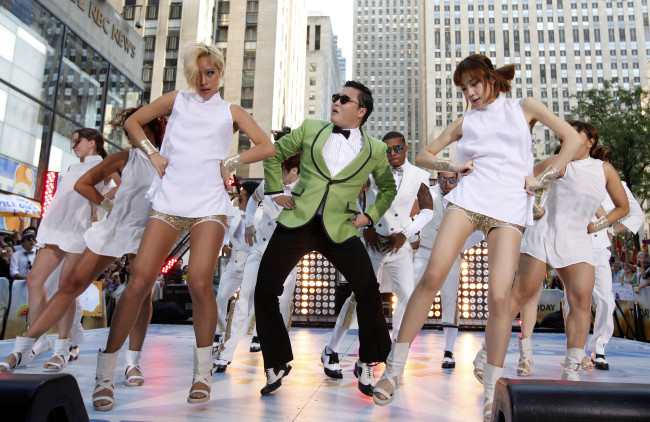 In this photo taken on Sept. 14, 2012, South Korean rapper PSY performs his massive K-pop hit "Gangnam Style" live on NBC's "Today" show in New York. His "Gangnam Style" video has more than 200 million YouTube views and counting, and it's easy to see why. Gangnam is only a small slice of Seoul, but it inspires a complicated mixture of desire, envy and bitterness. It's also the spark for PSY's catchy, world-conquering song. (AP-Yonhap News)

Gangnam is the most coveted address in Korea, but less than two generations ago it was little more than some forlorn homes surrounded by flat farmland and drainage ditches.

The district of Gangnam, which literally means ``south of the river,'' is about half the size of Manhattan. About 1 percent of Seoul's population lives there, but many of its residents are very rich. The average Gangnam apartment costs about $716,000, a sum that would take an average South Korean household 18 years to earn.

The seats of business and government power in Seoul have always been north of the Han River, in the neighborhoods around the royal palaces, and many old-money families still live there.

Gangnam, however, is new money, the beneficiary of a development boom that began in the 1970s.

As the price of high-rise apartments skyrocketed during a real estate investment frenzy in the early 2000s, landowners and speculators became wealthy practically overnight. The district's rich families got even richer.

The new wealth drew the trendiest boutiques and clubs and a proliferation of plastic surgery clinics, but it also provided access to something considered vital in modern South Korea: top-notch education in the form of prestigious private tutoring and prep schools. Gangnam households spend nearly four times more on education than the national average.

The notion that Gangnam residents have risen not by following the traditional South Korean virtues of hard work and sacrifice, but simply by living on a coveted piece of geography, irks many. The neighborhood's residents are seen by some as monopolizing the country's best education opportunities, the best cultural offerings and the best infrastructure, while spending big on foreign luxury goods to highlight their wealth.

More mainstream K-Pop performers, already famous in South Korea and across Asia, have tried and failed to crack the American market.

So how did PSY _ aka Park Jae-sang _ a stocky, 34-year-old rapper who was fined nearly $4,500 for smoking marijuana after his 2001 debut, get to be the one teaching Britney Spears how to do the horse-riding dance on American TV?

He attributed his success to ``soul or attitude.''

PSY, whose stage name stems from the first three letters of the word psycho, has always styled himself as a quirky outsider. But he is from a wealthy family and was actually raised and educated south of the Han River, near Gangnam.

He's an excellent dancer, a confident rapper and he's funny, but another reason for his breakthrough could be that less-than-polished image, said Jae-Ha Kim, a Chicago Tribune pop culture columnist and former music critic.

``People in America are comfortable with Asian guys who look like Jackie Chan and Jet Li, who are good-looking, but they're not the equivalent of Brad Pitt or Keanu Reeves,'' Kim said.

Part of the initial interest in ``Gangnam Style,'' Kim said, was a kind of ``freak-show mentality, where people are like, `This guy is funny.' But then you look at his choreography and you realize that you really have to know how to dance to do what he does. He's really good.''

Instead of cavorting in nightclubs, he parties with retirees on a disco-lighted tour bus. Instead of working out in a high-end health club, he lounges in a sauna with two tattooed gangsters. As he struts along with two beautiful models, they're pelted in the face with massive amounts of wind-blown trash and sticky confetti. The throne from which he delivers his hip-hop swagger is a toilet.

The song explores South Koreans' ``love-hate relationship with Gangnam,'' said Baak Eun-seok, a pop music critic. The rest of South Korea sees Gangnam residents as everything PSY isn't, he said: good-looking because of plastic surgery, stylish because they can splurge on luxury goods, slim thanks to yoga and personal trainers.

``PSY looks like a country bumpkin. He's a far cry from the so-called `Gangnam Style,''' Baak said. ``He's parodying himself.''

The video abounds with ironic, ``not upper-class'' images that ordinary South Koreans recognize, said Park Byoung-soo, a social commentator who runs a popular visual art blog. Old men play a Korean board game and middle-aged women wear wide-brimmed hats to keep the sun off their faces as they walk backward _ a popular way to exercise in South Korea.

PSY's character in the video is modeled on the clueless heroes of movies like ``The Naked Gun'' and ``Dumb & Dumber,'' he told Yonhap news agency earlier this year. He has also said his goal is to ``dress classy, but dance cheesy.''

Others see more than just a goofy outsider.

``PSY does something in his video that few other artists, Korean or otherwise, do: He parodies the wealthiest, most powerful neighborhood in South Korea,'' writes Sukjong Hong, creative nonfiction fellow at Open City, an online magazine. (AP)