North Korea is moving to introduce a full-scale cash-payment system for transactions among light-industry state firms in the latest apparent move to revamp its planned economy, a source in the communist state said.

The adoption of cash transactions marks a departure from the long-held “scriptural-money” system in which each firm uses an account in the central bank when it transacts with others to secure raw materials, electricity, machines and other means of production.

In its economic reform of July 2002, Pyongyang partially introduced cash transactions among companies in a controlled production-material exchange market. But the new measure seeks a full-scale adoption of cash payments, the source said.

Although this shift has yet to be officially announced, it appears to be part of the “June 28 new economic management measures,” seen as notable steps toward reform necessary to strengthen the legitimacy of fledgling leader Kim Jong-un and overcome poverty amid international isolation resulting from its nuclear ambitions and provocative behavior.

“It is their desperate attempt to resuscitate the moribund economy. It can be said that economic reform is in its infant stage. Pyongyang is sort of slowly moving away from the planned economy,” said Kim Young-hui, a North Korean defector and specialist on North Korean economy at the state-owned Korea Finance Corporation.

“The change means a collapse of the long-held system in which the authorities provide all means of production to each firm. Kim Jong-un has no other option but to push for the urgent task of reviving the economy.”

The North is expected to apply the cash-payment system mostly to provincial firms that produce consumer goods, while keeping the old system for military, heavy-industry and chemical firms to keep its control over the strategically vital ones, the source said. 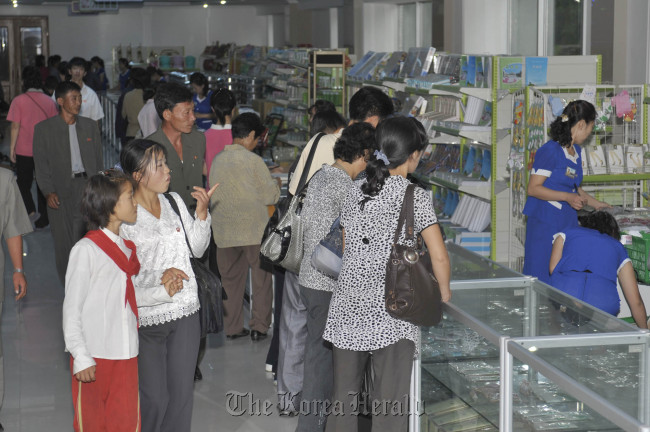 North Korean parents and children shop at a children’s department store in Pyongyang last Thursday. The Japan-based pro-North Korea newspaper Chosun Sinbo reported on it last Saturday. (Yonhap News)
News reports suggest that the North will offer to each firm an “initial investment” to cover their production costs and allow each to determine its production items, price and selling methods.

The seemingly greater autonomy, however, reflects the degree of the North Korean authorities’ inability to sustain the planned economic mechanism with sources of external assistance seriously limited amid deepening isolation.

Experts are skeptical of the measures to give more autonomy to companies whose overall operation rate is said to stand at around 20-30 percent because of the regime’s failure to provide necessary means of production.

“At any rate, companies in the North are suffering with their operation almost at a standstill. The North, through the measure, aims to normalize their production function by offering more autonomy in their management,” said Kwon Young-kyong, professor at the state-run Institute for Unification Education.

“But the state has little cash (for the initial provision of capital to kick-start the firms). We still have to wait and see how the measure will unfold.”

Kim Joong-ho, senior researcher at the Export-Import Bank of Korea, also painted a negative outlook for the cash-payment scheme, underscoring that the North should first establish the necessary financial and monetary infrastructure.

“North Korea’s currency is now seen as a scrap of paper (due to a poorly managed currency value). Using cash is workable when there is trustable, stable financial, currency management apparatus. Thus there remain problems of practicality and efficiency,” he said.

“As evidenced in the 2009 devaluation of its currency, North Korea’s cash has lost its function to store fiduciary value. Meanwhile, people have also experienced the benefit and power of foreign currency, particularly Chinese yuan.”

The devastating currency reform three years ago was aimed at stemming the spread of marketplaces, which became rampant as the food rationing system failed to function following the severe famine, dubbed the “Arduous March,” in the mid-1990s.

Like other socialist states, North Korea has maintained a dual payment system ― cash in the form of monthly wage for regular people and scriptural money for inter-company transactions.

Scriptural money is aimed at preventing the state’s non-cash resources allotted for each firm from turning into cash, flowing into the household sector and complicating its control of the currency and overall economic activities.

The dual system has been crumbling as more firms use cash to secure means of production while the overall economic system is on the verge of collapse with the regime running out of monetary and material resources to maintain the planned mechanism.

What is crucial for its economic reestablishment, experts say, is that the North first establish a banking system, through which people can confidently store their wealth, with companies benefitting from the financial system through stable investment and other methods.

The North is set to hold a rare session of the rubber-stamp Supreme People’s Assembly next Tuesday during which some observers expect Pyongyang to announce new laws for its overall economic reform.

The level of the North’s possible reform is hard to predict, experts say, stressing that Pyongyang has repeated a pattern of employing what appear to be reform measures only to retract them when they were deemed to pose a threat to the dynastic regime.

Pyongyang’s desire for economic reform has been detected in a flurry of recent media reports and academic documents.

The front page of the Tuesday edition of the Rodong Sinmun, the daily of the North’s ruling Workers’ Party, was filled with economy-related articles while pushing the article on Kim Jong-un, first secretary of the party, to the second page ― an exceptionally unusual article arrangement.

Last month, the North introduced a set of research papers by its scholars concerning topics ranging from the state control over the financial sector to the importance of currency circulation. They raised the prospect for possible financial reform.

The paper by Kim Un-chol, professor at Kim Il-sung University, said, “The country should strengthen state control over the financial sector to achieve a more stable economic development.”