“It’s surprising to see a Korean artist reach No. 1 on the iTunes chart, which accounts for about 80 percent of the U.S. online music charts,” his agency YG Entertainment said. 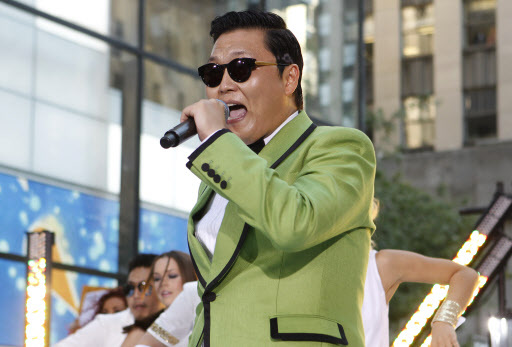 Psy debuted at 64th on the Billboard Hot 100 singles chart and remained No. 1 at Social 50, which ranks the most popular artists on YouTube and other SNS channels.

The 35-year-old singer has appeared on a string of popular U.S. shows in the last few days. His latest television appearance was on NBC’s “Saturday Night Live” on Saturday, of which the singer wrote on Korean SNS channel Me2Day, “I just finished SNL. It’s really overwhelming. Every day is so unreal.” He also posted his picture taken with two other actors on SNL on Twitter and Me2Day.

Psy performed his hit song on the “Today Show” on Friday morning in front of hundreds of fans gathered in front of Rockefeller Center in New York. Earlier last week, he was a surprise guest on NBC’s “The Ellen DeGeneres Show” where he taught his signature “horse-riding” dance to singer Britney Spears.

Since his music video “Gangnam Style” was posted on YouTube in July, it has reached more than 150 million views and spawned a series of parodies from around the globe.