One of his last acts as Deputy Prime Minister was to condemn the killing of U.S. Ambassador Chris Stevens during an attack on the United States’ consulate in Benghazi just hours before he was elected.

The attack brought more international attention to a situation Abu-Shakour had sought to downplay a month before. In a Reuters interview he stressed security as Libya’s most urgent task, but expressed optimism about its prospects, and that the violence was not as bad as perceived. If he still holds that opinion, the attack will not have helped persuade those watching from overseas. 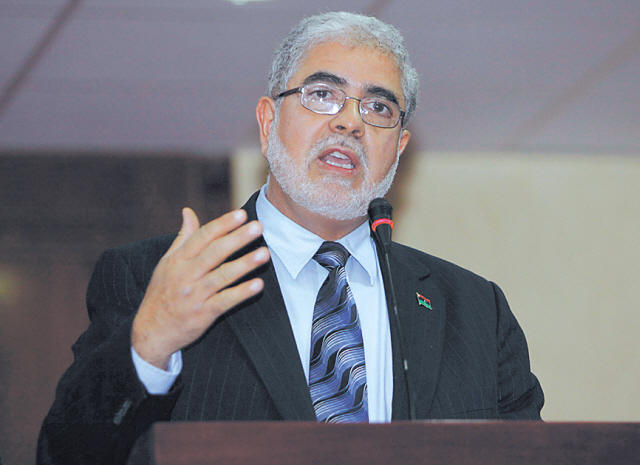 Mustafa Abu-Shakour (Yonhap News)
Abu-Shakour’s victory in the election was by just two votes in a runoff against Mahmoud Jibril, who was acting prime minister in the National Transitional Council immediately after Moammar Gadhafi’s death.

Some had mooted in the aftermath of Gadhafi’s overthrow that there may be tensions between Islamists and technocrats who built up their careers in the West, but Abu-Shakour’s election adds to indications that they may go hand-in-hand in Libya.

While Abu-Shakour studied and worked in the U.S. as an optical engineer, AFP described him as close to Islamist groups and won due to backing from the Muslim Brotherhood-linked Justice and Construction Party.

Jibril, who taught strategic planning and decision-making at the University of Pittsburgh in Pennsylvania in the 1980s, is also seen as liberal without being secular. U.S. diplomatic cables leaked by Wikileaks described him as reform-minded and understanding of the U.S. perspective, but he also reportedly said he would look to Sharia for guidance on legislation.

With the GNC chairman hailing from the left-wing National Front, and Jibril’s reform-minded National Forces Alliance the biggest party, liberalism appears to be strong in Libya. But it seems that however Abu-Shakour runs the country, Islamism will likely be a part of it.