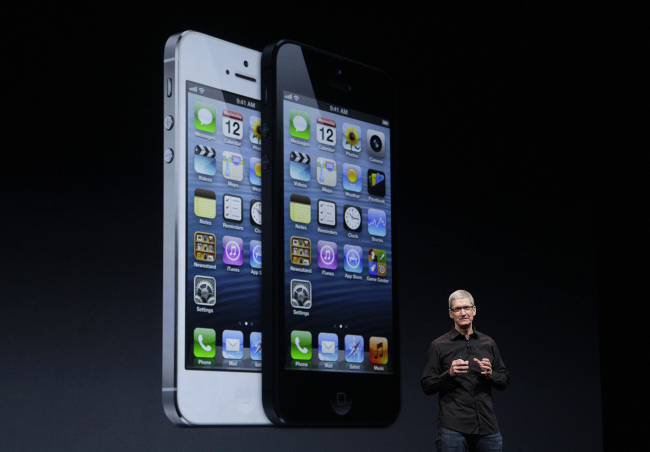 Apple CEO Tim Cook speaks in front of an image of the iPhone 5 during an Apple event in San Francisco, Wednesday. (AP-Yonhap)

For the first time, the iPhone is growing even as it slims down. After sticking for five years to the same screen size, Apple on Wednesday revealed a new phone that's taller, with a bigger display.

The iPhone 5 will go on sale in the U.S. and eight other countries next Friday, Sept. 21.

Even though it's taller than the iPhone 4S, it's lighter, thanks to a new screen technology that makes the whole phone thinner.

The bigger screen -- 10.16 centimeters measured diagonally -- creates room for another row of icons on the screen and lets widescreen movies fit better. The calendar will now show five days at a time instead of just three. Previous iPhone models carried 8.89-centimeter screens.

In another big change, the iPhone 5 will come with the capability to connect to the fastest new wireless data networks in the U.S. and overseas.

The new device also carries another distinction: It's the first iPhone developed and unveiled since the death of Apple founder Steve Jobs.

The iPhone that Jobs had conceived ushered in what he billed as “the post-PC era” -- a shift that is causing people to rely less on personal computers and more on mobile gadgets they can hold in their hand. Jobs died last October, the day after Apple introduced the iPhone 4S, which was the fifth version of Apple's phone.

There was little surprise in Wednesday's announcement. Despite the pains the company takes to hide its plans, the rough launch date, the new screen and the capability to connect to so-called LTE networks had been reported for months by blogs and analysts.

“There was nothing unexpected in terms of the new features of the iPhone,” said Tavis McCourt, an analyst with Raymond James.

That's a contrast to last year, when Apple watchers were first surprised by a delay in the launch, and then by the fact that the phone that was revealed was the iPhone 4S rather than a more radical update. The 4S, nevertheless, has been a smash success. During the first nine months that the iPhone 4S was on the market, Apple's revenue from iPhones has exceeded $63 billion, helping to establish Apple as the world's most valuable company ever.

One thing that did surprise McCourt this year: Apple is launching the phone in so many countries so quickly. On Day One, the phone will be available in Australia, Canada, France, Germany, Hong Kong, Japan, Singapore and the U.K., besides the U.S.

A week later, it will go on sale in 22 more countries, including Italy, Poland and Spain.

Another surprise about the iPhone 5 is that it's 18 percent thinner than its predecessor. The company was expected to use the space freed up by the new screen technology to expand the phone's battery, not make the phone thinner.

Apple followed its usual script for the new iPhone's coming-out party. Apple CEO Tim Cook, Jobs' hand-picked successor, kicked off the festivities before an audience of reporters, bloggers, applications developers and special guests with a summary of the company's milestones. He then handed things over to his top lieutenants, a group led by marketing chief Philip Schiller and mobile software executive Scott Forstall.

It has become such a familiar ritual that Cook, Schiller and Forstall all appeared to be wearing the same attire as they did at Apple's last product event in June. Adopting a personal work uniform was something that Jobs embraced. After learning that designer Issey Miyake had made work uniforms for Sony Corp. employees in Japan, Jobs eventually paid Miyake to make him the black mock turtlenecks that became the signature piece of clothing in an ensemble that included jeans and New Balance sneakers.

With Jobs gone, the Apple executives left the showmanship to the rock band Foo Fighters, who closed out the two-hour presentation with three songs, including one called “My Hero” dedicated to the company's employees for developing products like the iPhone 5.

It's the year's most anticipated phone. The number Apple can sell, analysts believe, is limited mostly by the production capacity of its suppliers. There had been concerns that supplies could be tight. Even so, analysts were expecting Apple to sell tens of millions of phones before the year is out, including perhaps as many as 10 million of the devices before this month is ever.

If the iPhone 5 lives up to the lofty expectations, it will be the company's hottest selling -- and most lucrative device yet. But it will face stiff competition from an array of smartphones running on software made by rivals Google Inc. and Microsoft Corp., as well as tablet computers that also cater to consumers' desire for a more convenient way to stay connected to the Web.

Apple has dominated the tablet market by selling more than 84 million iPads since they came out in April 2010, but it's facing a challenge from Amazon.com Inc. and Google. Both those companies are peddling less expensive tablets with slightly smaller screens than the iPad, a threat that many analysts expect Apple to answer next month by rolling out a mini-iPad.

The bigger screen in the iPhone 5 moves Apple somewhat closer to competing smartphones, but the iPhone is still small compared with its main rivals. Samsung Electronics Co., Apple's biggest competitor, has increased the screen size of its flagship phone line every year, and it's now 4.8 inches (12.19 centimeters) on the diagonal, about 45 percent larger than the one on the new iPhone. The new iPhone is lighter than Samsung's new Galaxy S III.

The iPhone will cost the same as the iPhone 4S did when it debuted, starting at $199 with a two-year contract in the U.S. Meanwhile, the price for the iPhone 4S will drop to $99 for new contract signers and the iPhone 4 will be free.

In the U.S., advance orders will start this Friday.

With the new model, Apple is ditching the connection port it's used for iPods, iPhones and iPads for nearly a decade in favor of a smaller, narrower one. That means Apple is still the holdout in an industry where other manufacturers have settled on a standard connector for charging and computer backups.

There will be adapters available so that the new phone will be able to connect to sound docks and other accessories designed for the old phones.

The camera on the back of the iPhone 5 has the same resolution as the one on the iPhone 4S, but takes pictures faster and works better in low light, Apple said.

The front-facing camera is getting an upgrade to high-definition, letting users take advantage of the faster data networks for videoconferencing.

The iPhone 5 will arrive with a new version of Apple's operating system, iOS. It will be available for download to older phones next Wednesday.

One feature missing from the new phone is a chip for near-field communications, or NFC. Other top-of-the-line phones are incorporating such chips, which let phones work as credit cards at some store payment terminals. They also enable phones to share data when “bumped” into each other.

Apple also announced a new iPod Touch model that brings over the changes applied to the iPhone 5, including the bigger screen and smaller connection port. For the first time, Apple's voice-controlled personal assistant software, Siri, will be available on the iPod. Apple is also updating its iTunes software for the Mac and PC, with what it says is a “dramatically simpler and cleaner interface.” It will be available as a free download in October.

In another audio-related update, the white earbuds that ship with all of Apple's portable devices are getting an update. Now called EarPods, they are tube-shaped, which Apple says will help meld them to the shape of your ear. The EarPods took three years to design, Apple said. They'll go on sale Wednesday as a stand-alone accessory for $29, but will be included free with new devices out in October.

Since Apple's main announcements were largely in line with expectations, investors registered a tepid response. Apple shares rose $9.13, or 1.4 percent, to close at $669.72. The shares have been on a tear as expectations rose for the iPhone 5, rallying 16 percent since Apple's latest earnings report, in July. On Monday, they hit an all-time high of $683.29. (AP)