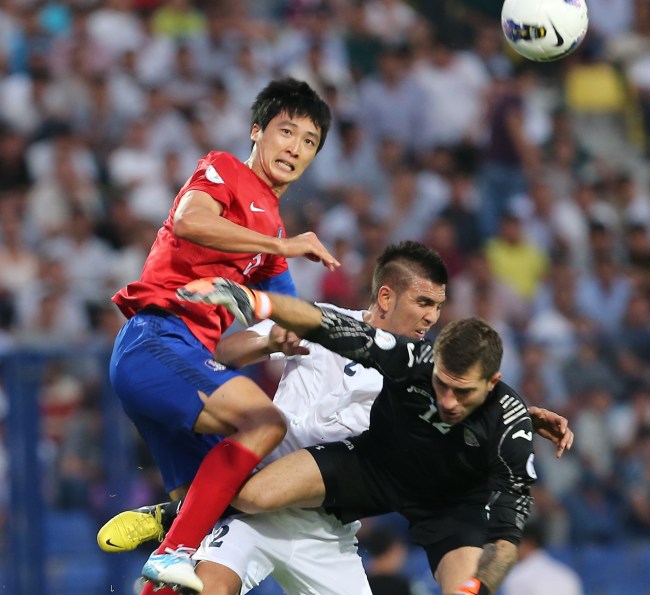 South Korea`s Kwak Tae-hwi (left) scores a goal during a match against Uzbekistan at Pakhtakor Stadium in Uzbekistan. (Yonhap News)

South Korea was held to a 2-2 draw against Uzbekistan here Tuesday in the regional qualifier for the 2014 FIFA World Cup in Brazil.

At Pakhtakor Stadium, captain Kwak Tae-hwi and striker Lee Dong-gook scored for the visitors, who entered the game as the favorites but were forced to play catch-up most of the time. Sanjar Tursunov scored for Uzbekistan, and was involved in a first-half own goal by South Korea's Ki Sung-yueng.

After the draw, South Korea still leads Group A with seven points after three games and remains in solid position to advance to its eighth consecutive World Cup. Iran, which began Tuesday with four points, lost to Lebanon 1-0 on the road to stay at four points. Iran, Qatar and Lebanon all have four points each, but Iran is ahead in the goal differential tiebreaker. Uzbekistan remains at the bottom of the group with two points. The top two countries from the group will reach the quadrennial tournament.

After the teams traded a goal apiece in the first half, Lee broke the tie in the 55th minute. He took a cross from left wingback Park Joo-ho and shot it past keeper Ignatiy Nesterov while falling to the ground.

Defender Shohruh Gadoev jumped to clear out Park's towering cross with his head but missed it completely, giving Lee enough space to control the ball and score.

But Uzbekistan pulled even just two minutes later, as Tursunov redirected a Server Djeparov cross with a sharp header from the right side.

The home team opened the scoring in the 12th, when Ki's clearing attempt of a Tursunov header ended inside the South Korean net.

South Korea equalized in the 43rd, as captain Kwak Tae-hwi headed in a long free kick from Ki. Defender Artyom Filiposyan got his foot on the ball but ended up putting it into his own net.

Desperate for a victory at home after going winless in two earlier matches, Uzbekistan was the aggressor from the start.

Moments before the opening goal, Ulugbek Bakaev almost scored with a lobbing shot past goalkeeper Jung Sung-ryong, but defender Lee Jung-soo cleared the ball before it bounced into the net.

Uzbekistan shot the ball with abandon and penetrated on the wings at will. South Koreans frequently had their passes stolen in midfield, and exhibited virtually none of the offensive flair that helped them beat Qatar and Lebanon by a combined 7-1 in June.

The home team could have gone up 2-0 in the 21st, if not for Jung's punching save on a hard shot by Tursunov from the point-blank range.

Both teams missed huge scoring opportunities in second-half injury time. Substitute Park Chu-young had a one-on-one breakaway chance but Nesterov turned him away with the punching save. On the other end, Tursunov rolled a shot just wide of the left post.

South Korea entered this match ranked 27th in the latest FIFA rankings, while Uzbekistan was at No. 70.

Ten countries have qualified for the final Asian round of the World Cup and have been divided into two groups of five.

Group B teams are Australia, Iraq, Japan, Jordan and Oman.

The top two countries from each group will qualify for the 2014 World Cup. The two third-place nations will enter a playoff for an extra chance to qualify. The ongoing round will wrap up in June next year, after teams have played each other within their group twice.

South Korea has played in every World Cup since 1986 and reached the semifinals in the 2002 tournament it co-hosted with Japan. (Yonhap News)