[ The Korea Herald – Send E-mail ]
[Newsmaker] Probing the unknown
By Korea Herald
Published : Aug 23, 2012 - 20:49
Updated : Aug 23, 2012 - 20:49
Curiosity, NASA’s unmanned vehicle currently exploring Mars, could hardly be more aptly named. The rover’s $2.5 billion mission is testament to the fact that, even in tough economic times, man has an insatiable desire to explore the unknown.

After successfully touching down on the Red Planet on Aug. 6, Curiosity made its first short test drive on Mars’ surface on Wednesday. Images transmitted back to Earth show vast plains of rusty, gravelly landscape, liberally punctuated by valleys and mountains. The rover will travel the planet’s barren surface for the next two years. Its stated goal: to find signs of life or the conditions necessary to support it. 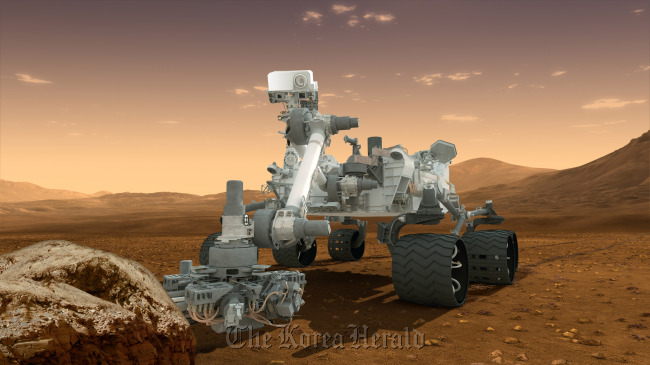 An artist’s drawing of NASA’s Mars Curiosity rover
Curiosity also provides a compelling counter-narrative to the almost ubiquitous talk in recent times of America’s decline. Mounting debt, a shaky economy and China’s rise have all contributed to the view that the U.S.’ days as an economic, political and military leader may be coming to an end.

Nevertheless, there can be no doubt as to the author of the Curiosity mission. The U.S., not China or any other country, sent Curiosity 352 million miles through space to land on the closet planet to Earth. It was an astonishing feat, encapsulating the kind of bombast that wins the U.S. praise from her adulators and scorn from her critics.

Talking heads will no doubt continue to debate whether the U.S.’ dominant position in the world is secure in the long-term. But, for the time being, there can be no denying that, for better or worse, the U.S. remains the unofficial leader of the world. Curiosity is yet another example of why.