[ The Korea Herald – Send E-mail ]
BMW in China explains Europe’s best new bonds
By Korea Herald
Published : Aug 12, 2012 - 20:23
Updated : Aug 12, 2012 - 20:23
Bayerische Motoren Werke AG’s China growth is being rewarded by investors who have pushed down relative yields on bonds sold in January by the biggest luxury carmaker more than any other new issue in Europe this year.

The spread on BMW’s 1.25 billion euros ($1.5 billion) of notes due 2015 has narrowed 77 basis points since its Jan. 13 sale to 6 basis points, Bloomberg generic prices show. The 94 percent decline outpaced an 83 percent drop for the 500 million euros of 2017 notes issued the same month by SA de Gestion des Stocks de Securite, the manager of French oil reserves.

BMW posted a 5 percent rise in July group sales, even as German factory orders fell more than twice as much as economists forecast the previous month. The Munich-based company is reaping the rewards of expansion in China, with first-half sales rising 25 percent in Asia and where BMW says it expects demand for luxury and SUV models to boost growth for the rest of the year.

“In China, cars are a symbol of status and achievement and families will put all their income into the purchase of these items,” said Vanessa Cochrane, a London-based debt analyst focusing on the auto industry at Mizuho International Plc. BMW has undertaken “successful expansion into China, where it is doubling capacity,” she said. 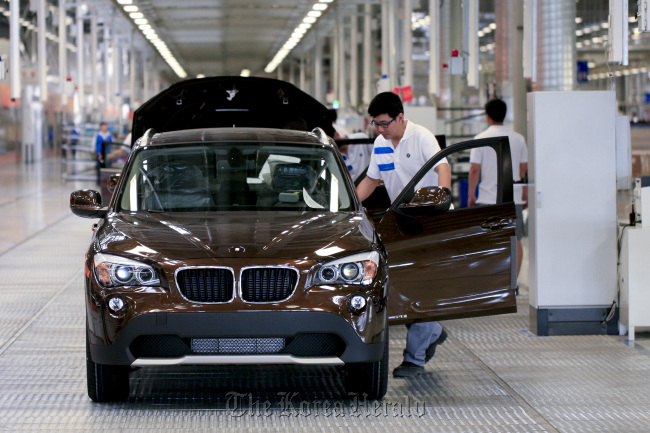 Chinese demand for luxury vehicles, particularly SUVs, is boosting investor confidence in BMW’s ability to ride out recession in Europe. The company forecasts a 20 percent to 25 percent rise in sales in China for 2012.

Bonds sold this year by German car manufacturers comprise four of the six best-performing notes out of a total 218 new issues, data compiled by Bloomberg show.

The spread on BMW’s 2.125 percent bonds from January shrank to 6 basis points from 14.5 basis points, or 0.145 percentage point, this month, Bloomberg data show,

“BMW has a solid liquidity and refinancing basis,” said Mathias Schmidt, a spokesman for the company, which had 8.1 billion euros in cash and cash equivalents on June 30. “Our liquidity puts us in a very good position in volatile capital markets.”

Credit-default swaps insuring against default on BMW’s debt fell 54 basis points to 99.5 basis points since the start of the year, putting them on par with those of Volkswagen and Daimler, Bloomberg data show. A decline signals improved perceptions of credit quality, with a basis point on a contract protecting 10 million euros of debt from default for five years equivalent to 1,000 euros a year.

“People like luxury brands,” said Stefan Sauerschell, a Frankfurt-based fund manager at Union Investment GmbH, who oversees 1 billion euros of debt and owns BMW bonds. “Plus, from a bondholder point of view, Germany is a safe haven.”

BMW, whose Mini cars made a cameo appearance at London’s Olympics opening ceremony, is focusing on expanding its range of models to fend off growing competition. In particular, it is extending products offered in China.

The company isn’t immune to the effects of Europe’s debt crisis. BMW said Aug. 1 that six-month sales in Italy and Spain fell short of the previous year’s figures. Chief Financial Officer Friedrich Eichiner told analysts on a conference call the same day that BMW’s car prices are 1 percent to 1.5 percent below year-ago levels.

Net income fell 28 percent to 1.28 billion euros, as the company received a one-time gain of 464 million euros in the same period in 2011 for adjusting credit risks.

“We are positive on BMW as its operational and debt dynamics are solid, but have decided to reduce positions on the automotive industry because of cyclical concerns, especially in Europe,” said Iain Bremner, a fund manager at LA Banque Postale Asset Management, who owns BMW bonds.

Moody’s Investors Service rates BMW at A2, the sixth- highest investment-grade ranking, while Standard & Poor’s has an equivalent A grade. S&P lifted its rating by one step in April, citing expected sustained demand for luxury cars and BMW’s and improved operating margin following four years of cost cuts.

It has a net debt to Ebitda, or earnings before interest, taxes, depreciation and amortization, at minus 0.8 times, according to Societe Generale SA. The ratio, which strips out financial services-related debt, compares with minus 0.9 times for Volkswagen and Daimler.

“The ongoing run for luxury brands in Asia is a factor in favour of BMW and its Asia sales make its EBITA margins more robust,” said Thomas Neuhold, who manages 300 million euros in corporate debt at Gutmann Kapitalanlage AG in Austria, including BMW bonds.

Spreads on BMW’s bonds average 68 basis points, Bank of America Merrill Lynch’s Global Automotive index shows. That compares with the average of 133 for the index, which contains 273 securities from companies including Volkswagen, Daimler and Peugeot SA.

BMW bonds returned 1.78 percent in July, according to Bank of America Merrill Lynch’s Euro Automotive index, compared with 1.69 percent for Daimler’s notes and 1.76 percent for Volkswagen’s debt. BMW’s stock has risen 16 percent this year, including a 6.8 percent rally in July. It traded at 60 euros at 8:10 a.m. in London.

“BMW is now accelerating past that of Daimler on account of its continued expansion in China and Daimler’s lack of SUV offerings, which are much favored in the Chinese market,” Mizuho’s Cochrane said.