“S.M. Entertainment will not be a company that only manages celebrities, produces music, drama series and theater performances like musicals. It will also become a leading exporter of entertainment content. This S.M. ART Exhibition will also be exported (to countries around the world),” Kim Young-min, CEO of S.M. Entertainment, told reporters at a press conference held at COEX. 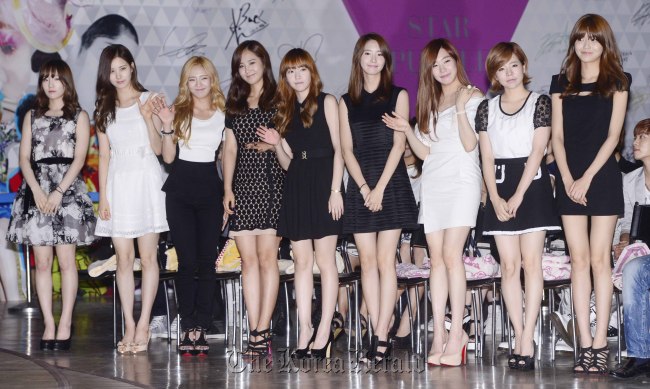 Members of Girls’ Generation pose for photo at a press conference held for S.M. ART Exhibition at COEX, Seoul, on Thursday. (Park Hae-mook/The Korea Herald)
“Our artists such as members of Girls’ Generation have collaborated with leading firms such as Samsung and LG Electronics to promote their latest product at global shows like at CES. This time, we brought our artists to the fore, putting their content at the center of attention,” he said.

The list of programs and shows at the exhibition includes “Fantasy Tree” ― a 13-meter-high circular installation consisting of 55 Samsung LED screens ― that shows super-sized S.M. Town artists performing in virtual space; “S.M. Motion” that offers visitors a chance to experience the 360 degree camera technique that was used in the Hollywood movie “Matrix,” and a media show with Hyundai Motors using projection mapping technology. Among the gamut of IT and entertainment offerings is SHINee’s live performance shown in a 3-D panorama theater. Visitors will also have a chance to make video calls and meet stars, peek into artists’ secretive daily lives and view props used in concerts.

As a sideline event, S.M. is holding “S.M. Town Live World Tour III” in Seoul on Aug. 18, a day before the exhibition ends.