“After a discussion with the members of T-ara and staff, (the company) has decided to end the contract with Hwa-young with no conditions attached,” said Kim Kwang-soo, head of Core Content Media, in a written statement. However, he did not give a specific reason for canceling the contract.

Hwa-young, the rapper of the group, has been in a wheelchair after she fell while performing on stage. She wasn’t able to perform at the group’s recent concert in Japan and on TV shows in Korea, the agency said. 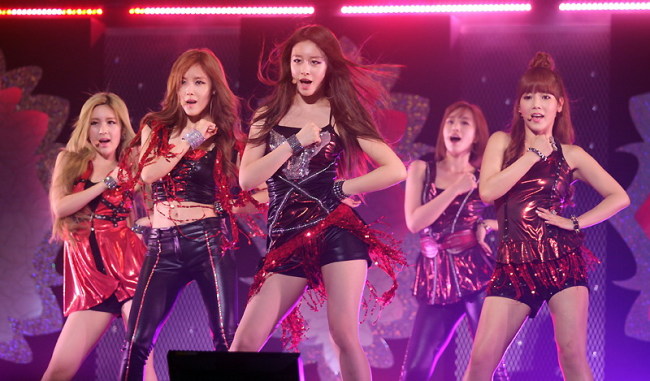 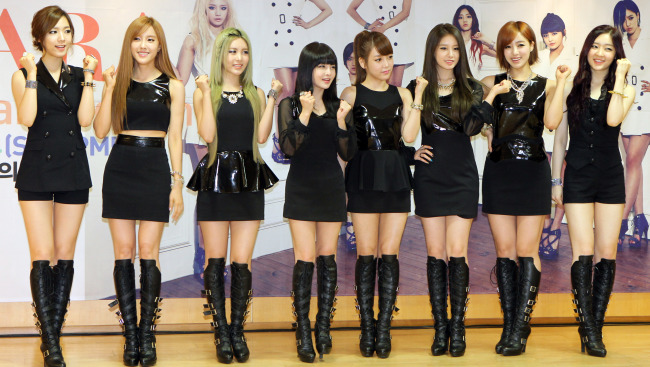 Members of T-ara including Hwa-young (left) pose for photo at a launching ceremony of their first official fan club “Queen’s” at Kyung Hee University in Seoul, on July 14. (Yonhap News)
T-ara members including Hyo-min and Ji-yeon tweeted messages allegedly blaming an unidentified person for lacking determination and calling the person “an acting genius.”

The agency, however, said that Hwa-young’s departure has nothing to do with the speculation that she has been ostracized by the group for not showing “enough determination” to be on the stage whereas other members in the past had performed despite injuries.

Kim of the agency added that other girls were embroiled in similar rumors but they were just having minor disputes.

“There has been similar rumor earlier that Eun-jung, So-yeon and Bo-ram were left out from the group. But it turned out that they were having a minor quarrel and they got along well later on. (The decision) has nothing to do with rumors of members having trouble,” the company said.

The announcement came three months after that the agency said T-ara will adopt a nine-member system. It said it would replace old members, in order to maintain the group’s popularity and to survive in a fiercely competitive pop music market. Kim then admitted that some members have changed since their debut, making less effort and becoming arrogant.

The pop group debuted as a seven-member group in 2009.