China announced on Wednesday that the ancient bulwark is more than two times longer than previously thought. Its first-ever official measurement concluded the structure is 21,196 kilometers long, revising its 2009 estimate of 8,852 kilometers.

The research said the wall’s eastern parts covered some areas which belonged to ancient Korean kingdoms. 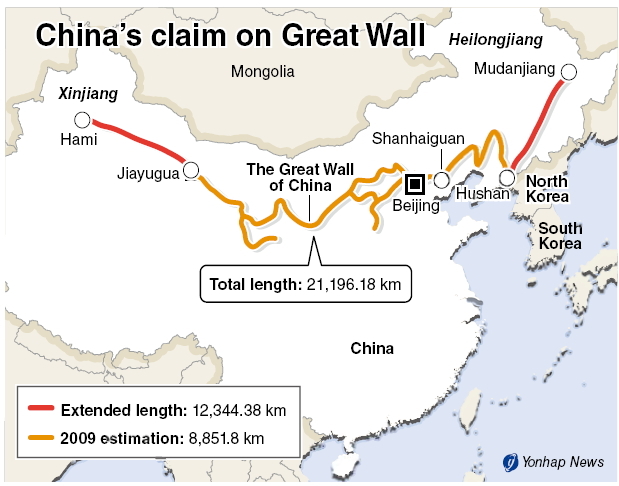 In response, Seoul officials pledged a thorough assessment while cautioning against hasty conclusions.

“The government’s principle stance is not to overlook any possible history distortion as it directly relates to Koreans’ ethnic identity,” Foreign Ministry deputy spokesperson Han Hye-jin told a news briefing.

“We’re in the middle of a close examination of the full text and will take strict action (if there’s evidence of distortion).”

Korean historians and activists called the claims “a political attempt to boast its old territorial prowess as a multiethnic country and rationalize its oppression of minority groups.”

The survey was conducted by the State Administration of Cultural Heritage and the State Bureau of Surveying and Mapping starting in 2007.

The agencies claimed to have found that the set of fortifications stretches across 15 provinces including western autonomous municipalities like Xinjiang, and some eastern regions which belonged to Goguryeo and Balhae in what is now northern Korea and southern Manchuria.

Chinese researchers said the previous survey only included structures built during the Ming Dynasty, which lasted from 1368 to 1644, but the most recent one covered later empires including Qing and Han.

Seoul’s Northeast Asian History Foundation said the latest study has a “factual error” because it took into account not only the generally accepted Great Wall pieces but also other small and large fortresses scattered across northern China.

“The number is not the actual length of the Great Wall, but a tally of all the lengths of different walls,” the state-run think tank said in a statement.

“China has apparently defined some districts in Jilin and Heilongjiang provinces as Great Wall areas in the survey but it’s too early to decide whether it falsified the facts at this point. We’ll look into details via academic monitoring and a spot study.”

China has been accused of overextending the length of the Great Wall since the implement of a legislation designed to protect the renowned tourist destination in 2006.

Its 2009 conclusion of 8,852 kilometers also reflects a sharp rise from some 6,000 kilometers it had determined earlier.

Controversy arose at the time as the study defined the Bakjak Wall erected by Goguryeo in the currently North Korean border city of Dandong as a previously unknown portion of the Great Wall. It is not immediately clear if the newest report did the same.

The former Goguryeo region has repeatedly been a source of diplomatic tension between Seoul and Beijing. China’s so-called Northeast Project aimed to verify that northeastern China has always been under its own control.

The empire, which lasted from 37 B.C. to 668 A.D., is deemed a golden age that produced scores of distinguished scholars and Buddhist divines. The modern name of Korea also derives from the kingdom.

The Great Wall is a series of walls and earthen works built more than 2,200 years ago to defend the borders from foreign invasion. It has believed to have been reinforced and extended many times during later dynasties. Only 8.2 percent of the original wall remains intact at present, previous studies show.

The world’s largest manmade structure was listed as a UNESCO world heritage site in 1987.

China’s minority groups including those in Xinjiang and Tibet have long been protesting against the central government, demanding independence or greater autonomy. Beijing has been criticized for its cultural repression and crackdown on “illicit” religious activities. The government denies the accusations.

Around nine million Muslim Uighurs are living in Xinjiang. The Dalai Lama, Tibet’s symbol and exiled spiritual leader, has often dealt a blow to bilateral ties between China and Western democracies.