Never has it been more difficult to define what it means to be Korean. Unprecedented immigration to the country in recent years, and the demographic and cultural change brought with it, has challenged the assumption that Korean citizenship and ethnicity are synonymous. Inevitably, this blurring of identity has crossed into the realm of sport.

The Korean Olympic Committee last month rejected a bid by Brazilian footballer Eninho for special naturalization that would have allowed the K-League star to play for the national side. Despite the Korea Football Association and national side coach Choi Kang-Hee supporting his naturalization, the KOC ruled against the Jeonbuk Hyundai Motors midfielder on the grounds that the player failed to demonstrate a basic understanding of Korean language and culture. The Ministry for Justice, which has the final say on cases of naturalization, is expected to follow the KOC’s recommendation. 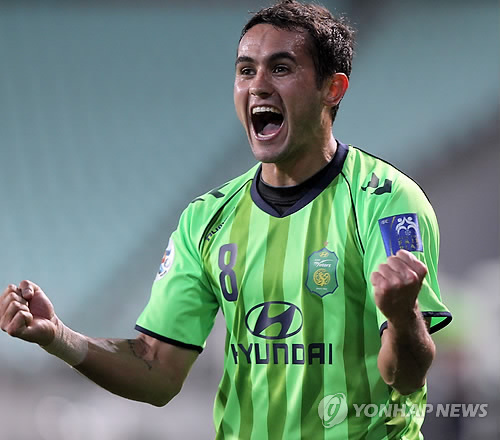 Despite its brief as a sporting organization, the KOC takes into account cultural familiarity when making recommendations on naturalization. When asked why by The Korea Herald, considering that the decision ultimately rests with the Justice Ministry, a spokesman for the KOC referred to the current law.

“The opinions of the Korea Football Association and national team coach are taken into account in regard to sporting ability, but as this is a question of double nationality, other factors have been considered also.”

A spokesman at the KFA said the football association fully respected the KOC’s decision, saying it “was the end of the story” as far as appealing the decision.

The spokesman, who did not wish to be named, went on to say that the benefits of naturalization made it a sensitive issue.

Regardless of legal decisions made at the governmental level, there remains the question of how accepting the general public is of visible minorities representing the nation.

“It seems that Koreans do not mind having ― or even like to have ― foreign athletes in certain professional sports such as baseball, basketball, etc. as long as they play well. I think that the demands for good foreign players in professional/commercial sports will continue and foreign athletes can play an important role there,” said Park Jung-sun, a professor of Asian Pacific Studies at California State University with an interest in South Korean identity and citizenship.

Park believes, however, that the Korean notion of “one blood” may mean the general public is not yet ready to embrace athletes with an outwardly foreign appearance. The public might be more welcoming toward athletes of Korean ancestry seen as “returning home” and “representing the homeland,” however.

“The Korean public may show a sense of disapproval, reluctance or even bewilderment if those foreign athletes are included in a ‘national team’ that represents Korea in the Olympics or similar international events. Although Koreans’ exposure to and understanding of multiculturalism have increased over the years, Koreans’ notions of ‘us’ and the nation are still, by and large, grounded on their shared blood.”

This view was echoed by the spokesman for the KFA.

“Cultural familiarity is quite significant for many conservative Korean people to allow foreign-born, foreign blood (people to play), obviously having a different appearance from the general Korean public. Still, Korean society is not fully open ... we are in the process of (dealing with) that.”

Stressing that it was his personal opinion rather than that of his organization, he said that Korea was still not ready for foreign-born players donning the national colors.

“It needs time to have a foreign player as a national player wearing the red shirt as a Korean representative, it needs time. It is not the right time or place, I think.”

Ko Seong-kyeong, a professor at the Department of Physical Education at Daegu University, believes that a public consensus is vital in any approach to the issue, whatever the opinion of sporting and governmental institutions.

“We must consider several factors for granting some foreign athletes special citizenship. Although some foreign players satisfied the legal guideline for citizenship and were permitted citizenship, we need public agreement. Especially, we have many native players in football, baseball and basketball. Therefore, before honoring national team players, we must try to make a public agreement.”

Koh emphasized, however, that foreign athletes have already made a major contribution to professional sport here.

“The foreign athletes playing in Korean leagues are very important to developing Korean professional sports. They are influencing the performance of native athletes to develop sports skill, manage and maintain fitness, and communicate with mass media. The native players have known about all this, but have not applied it in their sports fields. Therefore, Korean players have emulated them and have improved their sports ability.”

Another consideration is the risk of special consideration for athletes causing resentment ― both among Koreans and other immigrants.

“(Also), individuals who wish to gain Korean citizenship have to meet certain criteria. The criteria have been an obstacle to many foreigners including those with Korean heritage such as Korean Chinese. Thus, unless the same yardsticks are used for both athletes and non-athletes, it may generate resentment.”

Sim Gukby and Lee Hee-su contributed to this report. ― Ed.

On May 28 an MBC documentary depicting relationships between foreign men and Korean women provoked a vocal response from expats and Koreans alike. Below is some of the correspondence received about the program ― Ed.


When I first came to Korea in 2009 I quickly discovered how a factless and insidious group of vehement and vocal racists could affect policy in a country. The infamous Anti-English Spectrum had spread lies that foreign teachers were intentionally infecting people with HIV. Rather than be laughed into oblivion, the head of AES was invited by the Ministry of Justice to testify as an “expert” on immigrants in Korea. To this day, although E-6 visa holders do not have to be tested for HIV (the E-6 entertainer visa is commonly used to smuggle prostitutes), E-2 visa holders do. This is despite the fact that sex, not teaching, spreads HIV.

In 2009, numerous teachers pressured the National Human Rights Center of Korea to abandon the discriminatory checks ― no resolution. A woman took her case to the Korean Constitutional Court ― no resolution. Through pressure, the Anti-English Spectrum’s propaganda was largely removed from the Internet.

But it seems it was replaced by television, by a national broadcasting organization pretending to cover news.

MBC aired a piece about relationships between Korean women and foreign (non-Korean) men. To say it was blatantly biased, inaccurate and racist would be almost complementary to the trash that was allowed to pass for journalism.

First, the piece addressed Korean women who consorted with foreigners as “victims,” which is a paternalistic and inaccurate statement. If a Korean woman would like to step in and add her perspective I’m sure it would be helpful but I am not going to pretend to be qualified to present that perspective.

In any case, in the so-called “news” piece, facts were not checked or blatantly ignored. In one portion of the piece, a woman waits for a taxi, then a man comes up to her, and they quickly embrace. The piece narrates as though the two are strangers but human experience tells us otherwise. Perhaps the two had planned to meet but could not find each other, or fought and then reconciled on camera. As the “journalist” did not bother to speak to either party, we can never know.

After that, a person is interviewed who says he knows women who dated foreign men. This person states that he knew one woman who contracted AIDS. While theoretically possible, there is no reason for the “reporter” to allow second-hand information to suffice. As stated, the reporter was capable of finding a supposedly impregnated woman and another “victim,” both of whom remained anonymous, so there is no reason the AIDS patient could not be found.

Interestingly enough the piece focuses on white males, whom are typically English teachers or servicemen, both of whom are tested for contagious diseases before entry. So even assuming the veracity of the AIDS allegory (laughable) foreigners like those interviewed on camera could not have been the source.

After three and a half years here I have the luxury of a decent job, good colleagues, a close girlfriend, and a fair command of the Korean language. But there are also days that simply throwing all of those things, all of that effort, all of that love, out the window, and going home, makes more sense.

When I see reports like the foreigner “relationship” piece, I am reminded that there is a substantial population that believes that facts, logic, and foreigners all have no place in Korea. Were they just posters on the internet, the kingdom of misinformation, I’d be more understanding. But when major news outlets are willing to lend their name, their brand, their “truthiness” to such gross misguidance I have to ask myself: Just where am I thinking about living?

I have heard that the video was taken down, and that MBC apologized, saying they were not responsible for the content, which is laudable. This, and the laughter of my Korean friends at the piece, reminds me that the people who made the video are a fringe minority. But the vocal minority has already shown that it has power in the government, and news organizations must be responsible for the content they distribute, particularly when that content has no factual basis. If the face Korea wants to show the world is not one of abject xenophobia, the place to begin is, of course, in the media it produces.

It is very offensive and xenophobic. You can clearly see the idea that many Koreans have about all foreigners being diseased-ridden people who couldn’t get jobs in their home country, coming to Korea to infect and impregnate people. It casts us all as the “problem” in society and generalizes about everyone. It is very hurtful. I am none of the things that fit this popular stereotype, yet I face people’s ignorant assumptions and public accosting because of it. It is wrong but people are still allowed to say these offensive things about us publicly without repercussions.

This was the most shocking thing I have seen in my 3 years of living here. Being in the 21st century this type of media production is just not okay. This “reporting” is one-sided, disgraceful, sexist, and just an idiotic piece of work.

Stereotyping “foreigners” who live here is ridiculous. This work breeds hatred and racism. It should not have been allowed on the air. I will certainly go as far to say this is a form of indoctrination as some, perhaps many Koreans will actually believe this.

If this was to happen in another country it would be chastised in all forms of media and those involved would be expected to make a public apology. This is what I expect on this occasion also. Airing a piece of propaganda like this will only hinder Korean economic and social growth. If you cannot build a culture of acceptance for foreigners, they will not want to come ― there goes tourism, English education and economic growth (think about the Olympics!).

MBC needs to be held responsible for this piece of propaganda and should be held accountable. I demand an apology to the foreigner community. Korea is a wonderfully beautiful and amazing country; a television company should not portray Korea as a country full of small-minded bigots! This situation needs to be rectified!