Koreans who tasted a Korean-American chef’s Las Vegas cuisine in Seoul earlier this week might have found some common ground with him.

Akira Back’s seven-course Las Vegas meal was a representation of his memories of Korea and life experiences.

“When they eat it, they will go like ‘I ate this when I was little,’” Akira Back, the executive chef at the Yellowtail Japanese Restaurant & Lounge at the Bellagio Hotel in Las Vegas, told The Korea Herald. 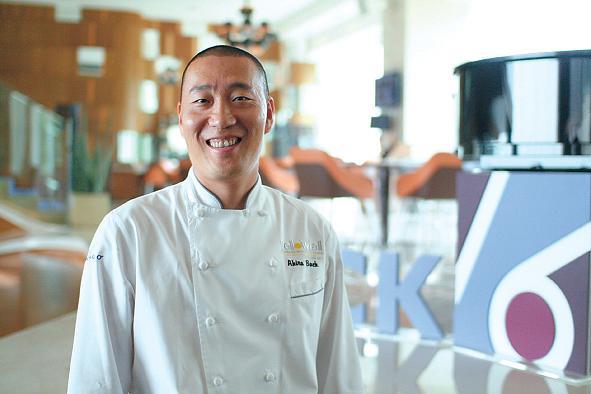 Chef Akira Back
At the gala dinner at the Sheraton Grande Walkerhill in Seoul on Thursday and Friday the snowboarder-turned-chef served a condensed version of his specialties in Korean, Japanese and American and Western food.

“What I would like to do is to infuse Korean taste and use techniques of Japanese and French cooking,” Back said.

Just like in Las Vegas, a melting pot of different people and cultures, his cuisine has a universal aspect, but still retains a Korean flavor.

“If Korean people are eating it, they will know it’s made by a Korean chef,” he said.

“It looks very simple, like unique Japanese cuisine, but has all different tastes. I can’t deny who I am,” he added. 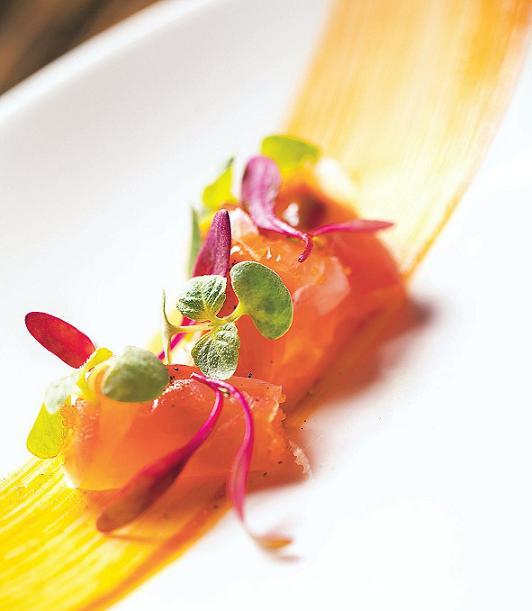 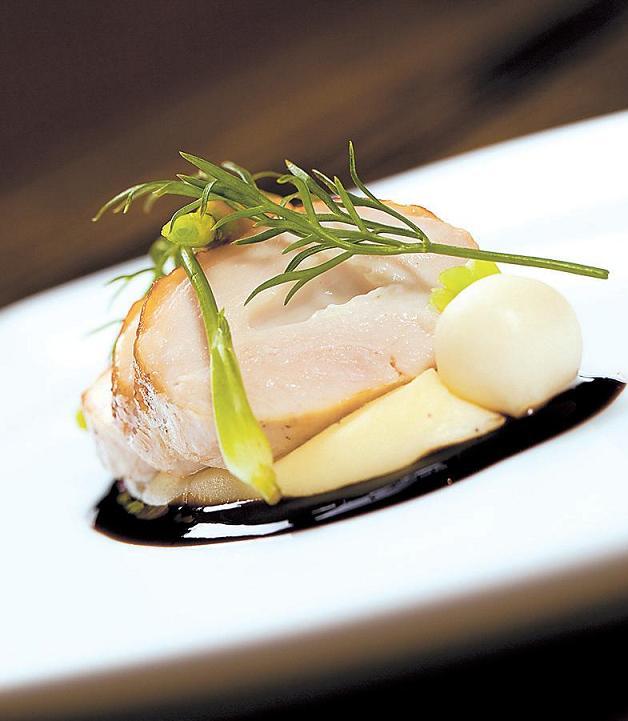 Chicken with pomme puree, balsamic chicken sauce (Sheraton Grande Walkerhill)
For example, he uses the sweet and sour red pepper sauce “chojang,” which reminds him of the experience of eating sashimi in Korea, and sesame oil for sea bream, or “domi,” from Jeju.

The use of Korean sauces is one way to bring out the Korean taste in his dishes.

Other dishes included grilled rib eye with wasabi butter, served with kimchi broth. This kimchi did not taste like the kimchi Koreans are used to.

“Everything represents me. When you eat it, the harmony is great,” Back said.

Back’s life has been as variegated as the flavors in his cuisine.

Back dreamed of becoming a baseball player when he was in Korea until 15. He went back and forth to Japan to study and learn baseball.

His family moved to the U.S. when he was 15 and there Back became a professional snowboarder. Then he made the successful transition from snowboarding to cooking and made his name known to the world by appearing on “Iron Chef America” in 2008.

“(Throughout) my life journey I never knew that I would become a chef,” Back said.

But his different experiences in Korea, Japan and America have given him a unique ability to mix different flavors and develop his own style.

“I grew up in Korean culture eating my mom’s food. That’s why it’s very easy for me to develop the (Korean) taste, but techniques I learned from Japanese cuisine and I learned cooking in America.”

As for combining different styles while preserving Korean flavors, Back thinks the Korean government’s promotion of Korean food should seek a more universal way.

“I think they have to understand the culture they are targeting, instead of pushing what they think is Korean. It’s about harmony and environment, especially service,” Back stressed.

He said the government can do better if it “adopts some different ways and becomes more artistic” in promoting Korean food overseas rather than simply pushing traditional bibimbap and kimchi to foreigners.

As Korean food gains popularity outside the country, he hopes to open a restaurant in Korea in the future to have more people taste his food.

His plan starts with London next year, opening his first overseas restaurant. He has other large cities in mind for restaurant openings.

Is he coming to Korea?

“If timing is right, why not? You never know. Dreams do come true, fingers crossed,” he said.