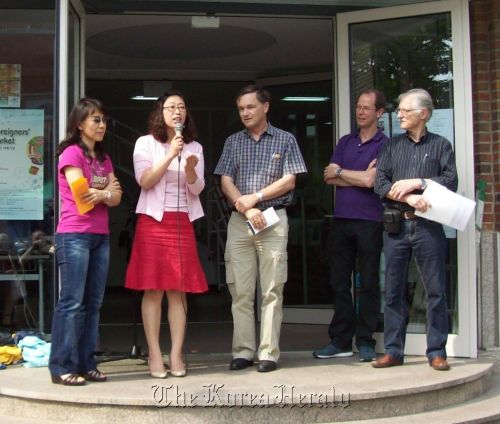 KUMFA representative Mok Young-hwa (second from left) speaks to attendees at the summer festival at the German school in Yongsan on May 19 after receiving their donation.
The German-speaking Catholic community of Seoul has donated to support Korean unwed mothers.

The community celebrated the Holy First Communion of a group of children on May 6, and the parents followed the tradition of choosing charities to benefit from the offerings made on the day ― opting for two NGOS supporting unwed mothers.

They chose to give 700,000 won ($600) raised by the small congregation to the Korean Unwed Mothers Families’ Association and Ae Ran Won.

“The motivation for supporting these organizations was that we wanted to help families in need, as the First Holy Communion is very much a family celebration in Western Europe,” said Alexander Nowak, who is Counselor for Cultural Affairs at the German Embassy.

“Recognizing that it is very difficult and requires a lot of courage and strength to be a single mother in Korea, we felt such organizations would be particularly worthy of support ― even more so since, in a way, St. Mary was a single mother, too when she conceived Jesus. And the Holy Family of Jesus, Mary and Joseph was ― in today’s terminology ― a ‘patchwork family.’”

The German-speaking Catholic Community of Seoul and the Evangelic Community of German Language of Seoul gave the donations to the two organizations at their summer festival at the German school in Yongsan on May 19.