The South Korean military plans to significantly beef up its arsenal of precision-guided missiles to counter threats from North Korea, officials said Monday.

“It is agreed that missile capabilities need to be reinforced in order to fundamentally improve our ability to respond to asymmetric threats from North Korea,” Defense Ministry spokesman Kim Min-seok told reporters.

He was responding to a news report that President Lee Myung-bak supported the ministry’s plan to inject 2.5 trillion won ($2.1 billion) into increasing the number of missiles, guided bombs and other precision munitions over the next five years.

Defense Minister Kim Kwan-jin reported the plan during a meeting to set a long-term budget April 28 and the ministry plans to submit the budget proposal to the National Assembly in October, according to reports. 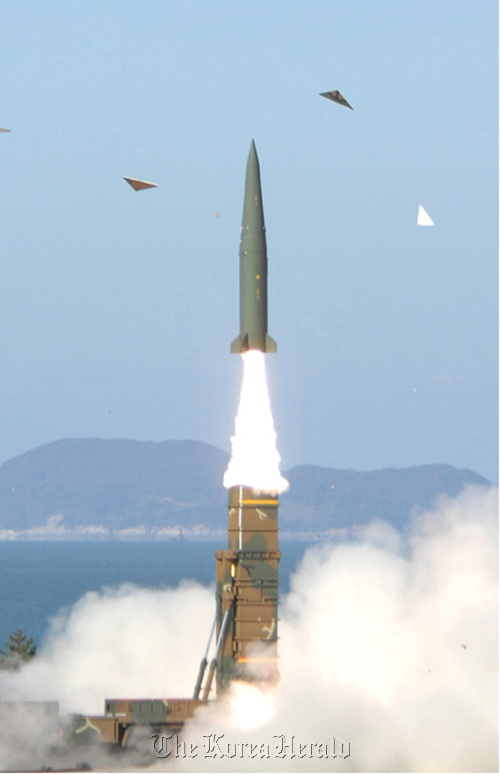 The South Korean military’s new cruise missile developed by the Agency for Defense Development is launched. (Yonhap News)
“The ministry plans to do this according to the process of reinforcing the military. The details about the scale and budget for the project cannot be revealed,” the spokesman said.

He added that as the process will involve other government organizations including the Ministry of Strategy and Finance and the National Assembly, time is required to see how the plans will pan out.

The plan is aimed at countering North Korea’s asymmetric threats such as missiles, nuclear weapons and special operations units.

Under the plan, the military will acquire a large amount of cruise missiles with striking distances ranging from 500 kilometers to 1,500 kilometers, and ballistic missiles with a 300-kilometer range. The plans also include precision-guided bombs and short-range missiles for attacking North Korea’s long-range rocket systems to minimize the impact such weaponry could have on South Korea.

Among the weapon systems, missiles are likely to take up the largest portion of the budget.

“The new long-range cruise missile costs about 4 billion won, and a significant part of the 2.5 trillion won will be directed to improving missile capabilities,” an unnamed military source was quoted as saying in local news reports. The source also said that the focus will be placed on cruise missiles rather than ballistic missiles.

On April 19, the Defense Ministry revealed that the military had deployed newly developed cruise missiles capable of striking any location in North Korea and a new ballistic missile.