[ The Korea Herald – Send E-mail ]
Seoul, Washington, Tokyo warn N.K. against further provocations
By Shin Hyon-hee
Published : May 21, 2012 - 19:46
Updated : May 21, 2012 - 19:46
Chief nuclear envoys from South Korea, the U.S. and Japan on Monday called on North Korea not to “miscalculate,” warning of a united response to any further provocations.

“We’re united in our resolve to respond, not just the three allies but China and Russia as well, if there are an additional provocations,” Glyn Davies, U.S. special representative for North Korea policy, told reporters after a meeting in Seoul with Lim Sung-nam of South Korea and Shinsuke Sugiyama of Japan.

“We hope that North Korea does not miscalculate. We expect and hope that North Korea will make a different set of decisions; will cease devoting resources to a nuclear missile program; will instead open up itself to the outside world; will make the decisions that benefit the people of North Korea rather than just the military and nuclear and missile establishment and rejoin the world community.” 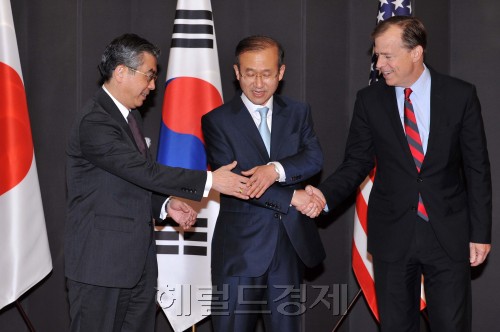 Seoul, Washington and Tokyo have been ratcheting up diplomatic efforts as concerns mount that the North may soon carry out a nuclear test, another rocket launch or border attack.

China, the North’s only major ally and economic backer, has also been trying to dissuade it from proceeding with the test.

“In response to the failed launch, the international community, including three countries, as well as China and Russia, has been able to send a clear and consistent message for North Korea to refrain from any further provocations,” Lim said in his opening remarks.

“There’s a different path, when and if North Korea makes the right decision.”

Seoul officials assume that Pyongyang is set for a third test but awaiting a political decision. Satellite photos showed work in progress in the North’s test site in the northeastern village of Punggye.

Pyongyang tried out its fission bombs in 2006 and 2009 after the U.N. Security Council imposed sanctions against similar rocket failures.

The Council recently added three North Korean firms to its blacklist following the latest launch, which it says violates a U.N. ban on nuclear and missile activity. Pyongyang maintains it aimed to put a peaceful satellite into orbit.

Cross-border tensions persist as the military-focused regime goes increasingly bellicose. Last month, it threatened to demolish the South Korean government in “three to four minutes” after President Lee Myung-bak criticized its rocket launch and stepped up its anti-Seoul propaganda since then.

On Tuesday, Davies will meet with Wu Dawei, China’s top nuclear envoy for North Korea, and other senior officials in Beijing to discuss North Korea and other issues.

He then plans to travel to Tokyo for talks with Sugiyama and other Japanese officials from Wednesday to Friday, the U.S. State Department said in a statement.