[ The Korea Herald – Send E-mail ]
Facebook execs talk growth as IPO meetings begin
By Korea Herald
Published : May 9, 2012 - 18:44
Updated : May 9, 2012 - 18:44
Facebook Inc. officials are touting growth prospects for the largest social network in meetings this week in New York and Boston with hundreds of would-be investors before its record initial public offering.

Facebook plans to raise as much as $11.8 billion in its IPO, the biggest ever for an Internet company. Zuckerberg, 27, has had to pitch his business model during Facebook’s years as a private company and probably won’t have trouble communicating the mission to prospective public investors, said Herman Leung, an analyst at Susquehanna International Group.

“It’s important to hear directly from him for investors who are about to put millions and millions of dollars into a company,” said Leung, who is based in San Francisco. “Convincing others now they should buy shouldn’t be that hard for a company that has amassed a user base of over 900 million.” 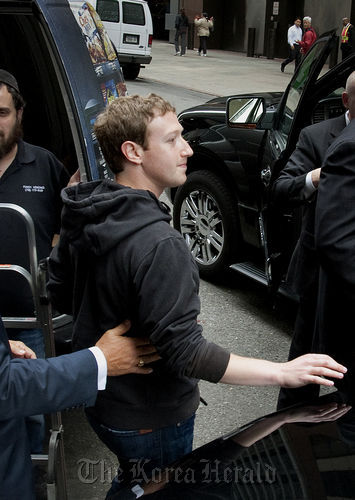 In New York, potential investors waited in a line that snaked through the Sheraton New York Hotel lobby and around the side of the building for a meeting that started about an hour late. CNBC televised footage of a hooded sweatshirt-clad Zuckerberg arriving at the hotel.

“The questions were all toward long-term elements of the business,” said Samuel Schwerin, managing partner at New York- based Millennium Technology Value Partners, which oversees $1 billion, including Facebook stock it bought in 2008. Schwerin attended the meeting Monday, and said he’ll add more shares in the IPO. “One of the things I was surprised by was the level of interest in the fundamental elements of how the company grows and how early it is in the value-creation story for Facebook.”

Attendees also watched a video featuring pitches by Zuckerberg, Sandberg and Ebersman that had been posted online last week. Facebook has arranged a meeting in Palo Alto, California, for the end of the week.

Executives addressed Facebook’s slowdown in revenue growth, saying the company is now facing a larger base of users and is working to be useful to them and advertisers, according to meeting attendees. Facebook is working on new ways to make money from mobile users, and on getting partners besides game maker Zynga Inc. to use its platform and currency, which is used to buy so-called virtual goods.

Zuckerberg, in New York, told investors that the $1 billion Instagram acquisition, announced last month, was contemplated over a long period. He said he had watched the company grow for a while and opportunities like Instagram are unique, according to several meeting attendees.

The Menlo Park, California-based company is seeking a market value of as much as $96 billion. Facebook is offering 337.4 million shares at $28 to $35 each, and is scheduled to price the offering on May 17, data compiled by Bloomberg show. The shares will be listed on the Nasdaq Stock Market under the symbol FB. Morgan Stanley, JPMorgan Chase & Co. and Goldman Sachs Group Inc. are leading the sale.

Facebook is offering 180 million shares, while existing owners such as Accel Partners, Goldman Sachs and Digital Sky Technologies are offering 157.4 million shares. Zuckerberg is offering 30.2 million of his 533.8 million shares, and may control about 57 percent of the voting power of Facebook’s capital stock outstanding after the offering, the filing shows.

“His attendance might demonstrate that the company processed the message that Mark’s absolute voting control makes his presence, at least at some of the larger meetings, much more important than would otherwise be the case,” Lise Buyer, principal at Class V Group in Portola Valley, California, said in an e-mailed statement. “The company’s job ― Mark, Sheryl, David together ― is to convince investors that Facebook’s brightest days are ahead and that therefore, there is significant room for an increase in the company’s value.”

Sandberg, who isn’t selling in the IPO, holds 1.9 million shares.

The initial share sale would eclipse the 2004 IPO of Google Inc., the world’s most valuable Internet company. Google’s offering, the same year Zuckerberg helped found Facebook, raised $1.9 billion and valued the company then at about $23 billion.