Domestic violence is often out of sight, occurring behind the closed doors of the family home. Nevertheless, national surveys on the issue suggest it happens with disturbing frequency.

According to the 2010 Korea National Survey of Domestic Violence and Sexual Violence, 53.8 percent of respondents who had been married had experienced spousal abuse in the previous year, and 16.7 percent had suffered physical abuse. Over the course of a marriage, the figures for physical abuse rose to 23.5 percent of respondents, with emotional abuse marking 50.7 percent, economic abuse 13.9 percent and sexual abuse 13.5 percent. For the purposes of the survey, spousal abuse was defined as including physical abuse, emotional abuse, economic abuse, sexual abuse, neglect and controlling behavior. The overall rate of abuse in 2010 was up from previous national surveys from 2004 and 2007. 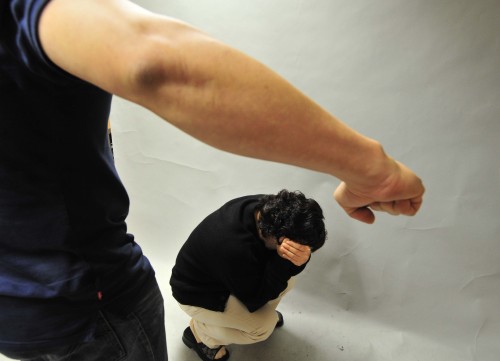 Despite the stark figures, many working in the area such as Choi Yong-ji of the Korea Sexual Violence Relief Center believe that neither society nor the authorities take the issue seriously enough.

“In Korea, society considers violence inside the family as a personal issue, not society’s issue to consider … Our center’s opinion is that society should consider it more seriously and the police should react more promptly to the issue. And because how the wives or the people who suffer from that kind of violence, their suffering is so great, we cannot consider it as a personal issue,” Choi said.

According to the 2010 survey, carried out by Yonsei University Graduate School of Social Welfare, 51 percent of victims considered their abuse to be a mild family problem. According to the same survey, police told victims to solve the violence through dialogue in more than 50 percent of cases reported to them. In almost 18 percent of cases, the police did not even come to the scene.

“… Because of how Korea considers wives as a personal belonging sometimes … even these days when the wives call the police because of violence of the husband, the police may come but they listen to the husband’s opinion that it is just a personal issue so just go back,” said Choi.

With what she deems low rates of prosecution at present, Choi doesn’t support tougher punishment for perpetrators. Instead, she believes, the culture of silence and acceptance of familial violence has to change.

The last year, however, has seen significant legal changes in how the authorities respond to reports of domestic violence. At the start of the month, police responding to reports of abuse gained new powers to enter homes without permission. This followed a revision in October allowing police to impose on-the-spot restraining orders.

“It has been pointed out the police’s intervention has not been positively done at the early stages of violence because family violence has been thought of as a light quarrel between husband and wife, and the institutional and legal foundation that allows police to actively intervene has been unsatisfactory,” the Ministry for Gender Equality and Family said in a statement.

“With these institutional improvements, police who respond to a report of family violence, to protect the victim, can positively take emergency measures, by entering the scene, ensuring the safety of the victim and investigating the conditions of violence.”

The ministry also said it has provided domestic violence awareness training to more than 2,000 police officers as of last year.

Han-kyun Kim, the director for research strategy at the Korean Institute of Criminology, accepts that there is an issue with the police response to domestic violence. But he rejects the suggestion that the matter is not taken seriously once it makes the courts.

“Some misunderstand that the Korean justice system does not treat the issue seriously, due to its traditional Confucian or paternalistic culture,” said Kim.

“It is true that criminal laws have their limitation in intervening in all domestic violence, as some of it may be a private matter. However, all international standards and norms Korea has ratified, its constitution, and special laws, such as the Act on Special Cases Concerning the Punishment of Crimes of Domestic Violence of 2011 and Act of the Prevention of Domestic Violence and Protection of Victims of 2010, declare domestic violence a crime, and punish the offenders as deserved.”

But even where abuse is taken seriously, support to help victims may come up short. Lee Mi-jeong, a researcher at Korean Women’s Development Institute, believes the current services available for victims are not sufficient.

“Based on the (domestic violence) law (passed) in 1997, the government provides shelters and counseling centers for the victims of domestic violence. But the resident shelter is quite limited; I think it is only six months. If the victim really needs to stay there the victim can have an extension. But the point is nowadays … once the violence happens, women get out of the house with their children, so they need some stable place to live in,” said Lee, adding that she supports recent government moves to help more victims stay in their own homes.

But she acknowledges that huge progress has been made in facing the problem, describing the passage of the 1997 law as a “revolutionary point.”

“In the meantime the attitude toward domestic violence has changed over time. I agree that, as we see in crime incidents nowadays, still the response of the policy is not enough. But if I observe over a long time span, it has been improved and it has been improving,” she said.

Lee also noted that women are not the only victims, despite common perceptions. Men and children also suffer abuse, although, in the case of the former, she said, the physical injuries sustained tend to be less severe. While there is a hotline for male victims of domestic violence in Korea, there are currently no shelters.

The 2010 survey does not break down victims by gender, but last year there were 189 arrests for abuse of husbands, according to police figures. The figure for wives was 4,481. But even how domestic violence is defined can be contentious, with, for example, leaving a child alone in a room and yelling both classified as “psychological violence,” while treating a spouse with indifference constitutes “neglect” and therefore domestic violence.

“In Korea, the women’s movement started with this hotline for women victims,” said Lee. “They created a hotline for women battered by their husbands. The target group was wives. But in the meantime, as the government tried to help these victims, the target group extended. People tend to think that victims of domestic violence are women but that is not always true. We (also) need to think about the victims of domestic violence among children and adolescents.”

Violence against children, in particular, is culturally acceptable, Lee contends.

“If parents are in control it is OK, but many times this beating happens out of emotional outrage on the part of parents. I think violence against children is widespread in Korea. I think people do not perceive it seriously and also the children or adolescents themselves tend to take it naturally. I think that is a problem,” she said.

Lee stressed the magnitude of the problem of familial violence with an uncomfortable observation.

“You have a higher chance of getting hit within a family boundary than by a stranger outside.”

I couldn’t say we do take it seriously enough though compared to other G20 nations. But I am personally glad that I could see some good signs of improvement in women’s rights by various scholarly attempts from the micro level of the individual to the macro level of a culture to increase the level of awareness of the prevention and treatment of abuse in Korean society.

Recently, the news of North Korea launching a satellite stirred up the whole world. It was announced as a satellite, but it was actually a test of a long-distance missile. Though the launch failed, we cannot set aside the fact that there is a possibility that North Korea will develop their missiles and attack South Korea. They have said several times that they will destroy South Korea with missiles. It is time for us to deeply consider increasing our missile range in order to defend against North Korea. Also, South Korea has to strengthen its national power by developing more missiles that can strike remote places.

South Korea also has to reinforce its national strength. South Korea should not be content with its present position. Actually, the missile treaty between South Korea and the U.S. was concluded partially because of America’s fear toward the development of South Korea’s missiles.

America wanted to stop South Korea from building more powerful missiles. However, South Korea should strive to persuade America and begin to develop mighty missiles that can be fired long distances. If South Korea were equipped with stronger arms, especially missiles, other countries would respect South Korea more.

Nowadays, there has been a heated controversy over possession of Dokdo between Japan and South Korea. On this issue, South Korea should counteract Japan more actively. If Japan is not convinced to give up through negotiations, South Korea should also threaten Japan saying that we could also go to war against Japan if it does not give up. Though this idea might seem too extreme, South Korea should definitely do something about our land, Dokdo. If Japan succeeds in possessing Dokdo, more and more countries besides Japan will ignore us and claim their dominium over every land of Korea. Developing missiles can be one means to strengthen South Korea’s national power.