The Eurozone crisis has threatened not only the economic stability of the 17-countries within the single-currency union but of all Europe and beyond.

As Eurozone countries struggle to overcome soaring debt levels and public deficits, face tough challenges to combat weak banking systems, economic recession and high unemployment, some have even questioned if the end could be nigh for the European Union.

But EU Ambassador Tomasz Kozlowski said he was convinced that the EU could emerge from current troubles even stronger and more integrated than before.

“There is a general understanding that these problems that we have faced over the past two or three years have not been caused by European integration,” he said. “They have been caused by the lack of common instruments and capabilities to react to these challenges because of the very simple fact that our integration has not been strong enough. 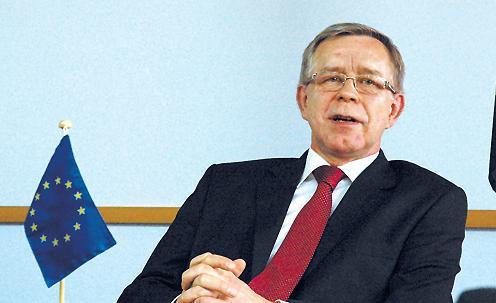 EU Ambassador Tomasz Kozlowski (EU Embassy)
“That is why the way we are coming out of the current situation is not to pull apart different elements of the European Union but to strengthen our integration process. That is why we are trying our best to introduce elements of common economic and fiscal policies.

“Of course the process is not easy, and the remedies are not so easy and obvious.”

Kozlowski was commenting ahead of Europe Day, which celebrates the initiation of the unique union of nations 62 years ago.

May 9 marks the anniversary of The Schuman Declaration, made in 1950 by France’s then Foreign Minister Robert Schuman. It is viewed as the foundation of the EU as it stands today. The pact that followed forged close economic links between the six signatory countries, with the aim of maintaining peaceful relations following World War II.

The ambassador praised the project that has helped the region’s countries worked together closely and maintained the peace for more than 60 years.

“The 62nd anniversary of the Schuman declaration enables us to look back at the history of European integration based on this spirit of this cooperation and partnership and look forward,” Kozlowski said.

Now, the union that has grown to 27 nations faces a new set of challenges. Greece, Italy, Portugal, Spain and Ireland have suffered the worst economic crises in history, but their problems have shaken the whole single currency bloc, raising questions over the EU’s strength and ability to weather the storm.

Although Ambassador Kozlowski acknowledged that the EU integration process had been criticized, he said that the benefits European citizens enjoyed ― from free trade to freedom of travel ― made the majority of them view the union as worthwhile.

In spite of recent IMF warnings that Eurozone countries must take robust action to avoid slipping further into economic crisis, the ambassador said he thought the EU economy was on the road to recovery.

“Clearly, the worst is over,” he said. “Of course we should remain cautious and persistent in implementing these measures which have been agreed. But overall, my feeling is that the perception of the situation in the EU is much worse than the reality on the ground.

“Of course we have problems. We have difficulties in some EU member states. But if you were to take the European Union as an entity, the public debt in Europe has reached a level of 85 percent of our combined GDP. This is a lot, but it is much less than in the U.S. and in Japan.”

EU countries have agreed a raft of measures to overhaul the bloc’s financial systems, as well as development strategies to move economies forward. And last March, all EU member states bar the U.K. and the Czech Republic signed the fiscal compact to regulate in areas such as public debt levels in an effort to avoid a repeat of the crisis.

Kozlowski also said that while “extremely difficult” austerity measures were essential to tackle the crisis, they were accompanied by support and pro-growth policies.

“Sometimes these measures have been extremely difficult and painful but there is a general consent that there is no other way,” he said.

He stressed that the EU, with a GDP of more than 14 trillion euros ($17.5 trillion), was not focusing solely on internal issues but working to build more influence in the international arena.

“Very often Europe is a bit criticized that its political presence in East Asia doesn’t match its economic position, and to some extent it is true, but if we were to take trade and investments as positive factors that serve the interests of peace and security we are a very important partner,” he said, stressing that the EU was still the world’s largest provider of development assistance, largest trader and largest foreign investor when all member countries were taken together.

EU trade with Korea has exceeded $100 billion in the last year. The 11.5 percent increase has been aided by the ratification of the Korea-EU FTA in July 2011, which Kozlowski said could bring mutual growth of tens of millions of euros.

“The EU is the second trading partner for Korea and the first foreign investor in Korea, with approximately 40 percent of cumulative foreign investments in Korea having come from Europe,” he added.

The EU’s strategic partnership and high level political dialogue with Korea aim to help the two engage in other fields. But cooperation in specific areas such as science, technology, education and research still needed to be increased, Kozlowski said.