[ The Korea Herald – Send E-mail ]
National Assembly passes bill to prevent floor violence
By Korea Herald
Published : May 2, 2012 - 19:10
Updated : May 2, 2012 - 20:28
The outgoing National Assembly passed the contentious bill aimed at preventing violence from disrupting the legislative process, along with about 60 other proposals during its last plenary session late Wednesday.

The ruling Saenuri Party and the main opposition Democratic United Party reached a last-minute agreement on a watered-down version of the revision to the National Assembly Act that introduces a filibuster and tightens the quorum for votes.

Of the 192 attending lawmakers, 127 approved the bill while 48 were opposed and 17 abstained.

The Assembly also passed a bill permitting the sale of over-the-counter drugs at convenience stores, and a new law allowing police to trace the locations of crime victims through their mobile phones without a warrant. 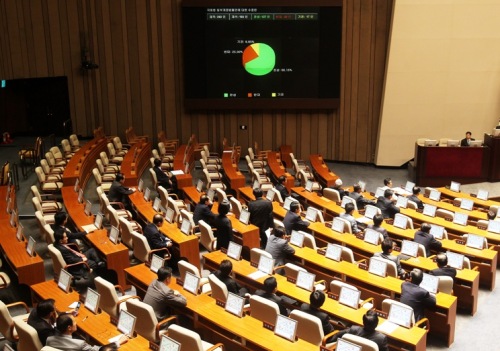 National Assembly members vote on about 60 bills during a plenary session Wednesday. (Yonhap News)
The bill to strengthen punishment on illegal fishing in the West Sea by increasing the maximum fine to 200 million won ($177,500) from 100 million won was also approved amid tension over clashes between the Korean Coast Guard and Chinese fishermen.

The last plenary session wrapped up the glitch-filled 18th National Assembly, which managed to vote on only 55 percent of the bills submitted during its four-year term. The Assembly voted on 8,144 bills out of 14,727 that were submitted, meaning more than 6,000 bills were scrapped automatically. The 18th Assembly closes formally on May 28.

The rival parties locked horns for the last time over the controversial bill aimed at reducing violence at the National Assembly due to opposition by some Saenuri members who contended that the revised act may hinder important bills from passing the Assembly at all.

Upon public criticism over their failure to reach an agreement, the floor leaders of the ruling and opposition parties met on several occasions over the past week before managing to hammer out a compromise.

The compromised version submitted by floor leaders Hwang Woo-yea of the Saenuri Party and Kim Jin-pyo of the DUP enables a fast track vote when demanded by at least half of the attending lawmakers at a relevant standing committee or current lawmakers of the plenary session to be approved by three-fifths of the lawmakers in an anonymous vote.

The two parties also agreed to enable faster legislative process for the bills pending at the Legislative and Judiciary Committee for 120 days or more, in addition to introducing the filibuster, while restricting the speaker from railroading through a bill unless in a crisis situation.

Rival party members continued to wrangle over the pros and cons of the National Assembly bill until the last minute in their floor speeches.

“The bill requiring a three-fifths approval goes against the principle and philosophy of the rule of majority that is the basis of democracy. The assembly is bringing a vegetated state upon itself,” Saenuri Rep. Shim Jae-chul said.

“In addition to getting rid of the violence at the Assembly ... lawmakers will be able to vote without being restricted to their party theories through the revision. ... If the revised bill fails to work, we can always revise it further later,“ Rep. Kim Sung-gon said.

Other noteworthy bills that the outgoing lawmakers passed included a resolution condemning the missile launch by North Korea last month, along with an act to enable consumers to trace the origin of imported beef products and a restriction against conglomerates from entering public information projects as part of the efforts to protect small and mid-sized companies.

In the meantime, some of the key proposals being scrapped upon the closure of the incumbent parliament include the bill on North Korean human rights, which had remained floating at the Legislative and Judiciary Committee since 2008 due to partisan differences.