The display of a new type of missile by North Korea during its celebrations for the centenary of its founder’s birth was no doubt intended as a show of military might. But it also sharpened focus on South Korea’s comparable missile capabilities ― and whether they are up to the task of national defense.

Seemingly keen to make a statement of its own, the Ministry of National Defense on Thursday revealed its two latest missiles to media for the first time. One, a cruise missile, has a presumed range of at least 1,000 km, the other, a ballistic weapon, just 300 km. The discrepancy in range doesn’t reflect technical limitations. It is the result of an agreement with the U.S., signed in 1979 and revised in 2001, limiting the reach of South Korean ballistic missiles to 300 km, putting much of North Korea out range. Pyongyang’s arsenal includes ballistic missiles with an estimated range of up to 6,000 km. Ballistic missiles follow a trajectory and are generally faster and more difficult to intercept than their cruise counterparts.

President Lee Myung-bak believes the ballistic range must be extended to counter North Korean threats. He told media last month that he believed there would be a compromise between Seoul and Washington on the issue in the near future. South defense officials quoted in recent media reports have indicated that compromise is likely to result in a new maximum range of 800 km. 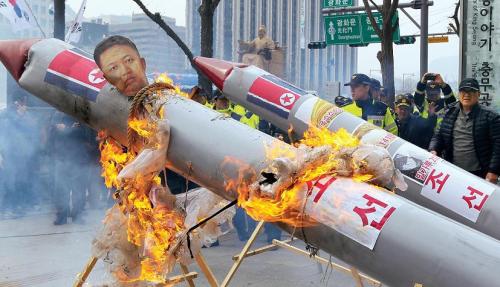 Protestors burn a mock missile in Seoul to oppose Pyongyang’s recent long range-missile test. (Yonhap News)
Song Dae-sung, the president of the Seoul-based Sejong Institute, is one of many security analysts who agree with the president’s stance.

He sees the current limitation’s on Seoul’s arsenal to be a major defensive weakness, likening the current situation to having “a short swatter which can’t even reach the mosquito.”

Considering its close alliance, it is seems inconceivable that Seoul would go it alone in extending its missile range. But, according to Song, persistent North Korean aggression is likely to override U.S. concerns about missile proliferation.

Park Jung-eun, the director of the peace and international solidarity team at civic group People’s Solidarity for Participatory Democracy, however, believes North Korea’s missile capability, while “menacing,” has been “exaggerated” by South Korea and the U.S.

“As you know well, the South Korean military has developed and deployed a new cruise missile capable of making a precision strike at a target anywhere in North Korea. It means that South Korea already retains the capability to strike the North without an extension of the missile range and it just intends to strengthen military capability more,” she said.

She sees an extension as likely to spark the further build-up of arms in the region.

“I think extension of the missile range will cause and escalate the arms race toward an endless vicious circle, even though the rocket launch of North Korea should be condemned.”

On April 17, Park’s organization released a statement blaming military tension on the Korean Peninsula and elsewhere on too much military spending.

“This year, South Korean government’s military spending budget is 33 trillion won, and the government is planning to make a contract of around 14 trillion won on purchasing arms,” it read, “ … Does humankind and especially the Korean Peninsula become more peaceful and safe by spending this amount of money?

Yang Moo-jin, a professor at the University of North Korean Studies in Seoul, also expressed concerns about stoking regional tension in an interview with the Korea Herald last month.

“When such talks (over the missile range) proceed amid good inter-Korean relations and low tension on the Korean Peninsula, it would be relatively easier to get support from the neighboring nations,” he said. “But under the current situation, we should take more caution. It is in fact unrealistic. We appear to be going backward. When we are in an era of arms reduction, we now talk about (the extension of the range), which could lead to a regional arms race.”

“The extension of the missile range of South Korea is a kind of response,” he said, “an execution for the right of self-defense, against North Korean military provocations.”

Lee Tai-hwan, a colleague of Song at the Sejong Institute, argues that a missile range extension could actually help limit the buildup of arms north of the border.

For the U.S., one of 130 signatories to the Hague Code of Conduct against Ballistic Missile Proliferation, an endorsement of Korea’s position might risk being seen as compromising its stated stance of non-proliferation.

But the U.S., among other countries, has failed to fully honor its commitments under the convention, including providing advance notice of ballistic missile launches, according to Washington, D.C.-based Armscontrol.org.

The Obama administration, however, did announce in 2010 that it would reduce the number of warheads on each of its 450 Minuteman III intercontinental ballistic missiles from three to one, and that it would retire all nuclear warhead-equipped Tomahawk cruise missiles, according to the website.

Park believes that the U.S. must reduce its own weapons stockpiles for it to have any persuasive power on arms reduction.

“I think the issue of missile range is not a matter only between South and North (Koreas). The military powers like the U.S. developed the capability and restricted other countries from obtaining it. It causes unfairness, inevitably, not lending itself to persuasion. It needs bold steps to reduce arms including missiles and stop the development of weapons of mass destruction.”

She maintains that it would be best to deal with North Korea’s missile threat through negotiations between Pyongyang and Washington.

But the Sejong Institute’s Lee said that lifting the range restriction is nothing short of a “necessity,” and the country should no longer have to depend on the U.S.’s missile umbrella.

“It all depends on North Korea’s actions and development of long-range missiles, otherwise it wouldn’t be an issue at all. While North Korea is developing its own long missiles, it is not fair to restrict Korea. It is a very simple argument.”

If it’s all about the balance of power and one-upmanship, which many think it is, then maybe instead of worrying about ballistic missiles, the Korean government should throw another half-billion dollars at KARI and demand a successful rocket launch.

Of course, all of the preceding is a little tongue in cheek. If the U.S. agrees to negotiate new terms of agreement on missile range and other limitations, then Korea should start developing long-range missiles. Maybe we shouldn’t call them missiles or bombs; that scares people.

We could just call them “deterrents.” We should build long-range deterrents so that other people don’t use their ICBMs (Inter-continental-ballistic-deterrent) on us.

We need to increase our ballistic missile range. Because North Korea and South Korea are still fighting. The Korean War is still present progressive form. Besides, North Korea continuously threatens South Korea. It is a warmonger. The U.S. and other powerful countries stopped giving food or medicine to North Korea. Nevertheless, they’re still making military threats. Because of North Korea’s actions, the world faces a nuclear threat.

Lately, Kim Jong-un acceded to the throne. They need some coalition power. War is definitely the best way for this. For this reason, they can’t stop their military actions.

Sooner or later, war could actually happen in Korea, if they launch another attack like the one on Yeonpyeongdo.

If we start a war with North Korea, they can fire on our land wherever they want ― all the way to Jeju. So we should prepare for this worst situation. We need to revise our missiles’ effective range. It’s not an optional thing. America’s severe restriction on the missile range must be nullified.

I think don’t think it’s a matter of whether to increase the ballistic missile range, but of how we treat North Korea on the basis on what kind of policy. We have enough power to confront the North under the US-ROK military cooperation. From the perspective of national defense, we have U.S. backing and our own capability, no matter how long the range it is. The government should not focus on whether it would expand its range or not, but concentrate on the possible change of the North regime.

I think it is necessary to increase the ballistic missile range. We need more power than now. Because North Korea has lots and lots of dangerous weapons such as various missiles which can destroy South Korea. Furthermore, Kim Jong-un became leader of North Korea just a few months ago. That means he needs to show his power. So, he is going to try to do something as his father, Kim Jong il, did. Recently, North Korea’s missile launch failed. So, if we prepared missiles against North Korea, they won’t attack us easily.