In a meeting with the local media here, Adm. Samuel Locklear, commander of the U.S. Pacific Command, expressed hopes that the leadership in Pyongyang will become a responsible member of the international community that abides by global obligations for peace and stability.

“I don’t think it would be really appropriate for me to comment on how we pursue any future military operations, but I can tell you that with the alliance, we are potentially looking at all options,” he said at the meeting in the Yongsan Garrison. 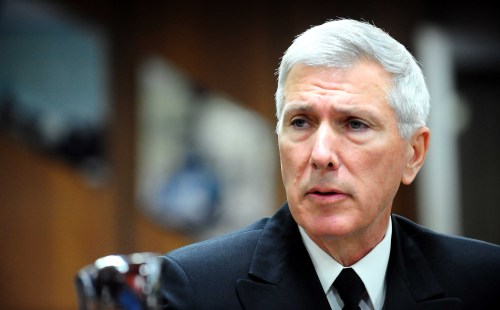 “It’s true that in the past that the North Korean government has followed this type of missile launch with further provocations, but it is my hope that this will not occur, but in this case, hope is not enough,” he said.

“I can assure you that we will work very closely with the allies in this region to monitor the situation in North Korea for future provocations, to ensure the security of the environment.”

Regarding the new ballistic missile the North unveiled Sunday, he expressed uncertainty over its viability.

“I am not aware of the viability of the missiles ... whether they were real missiles or not I can assure you that the U.S. and our allies are monitoring very closely future developments of these types of missiles. We will be assessing the capabilities as we move forward,” he said.

As widely expected, the North unveiled an advanced long-range ballistic missile on Sunday, confirming that it has continued developing its warhead delivery capabilities at the expense of its starving people.

Experts believe that the new missile has a similar or longer range than the Taepodong-2 missile presumed to have a range of more than 6,700 kilometers.