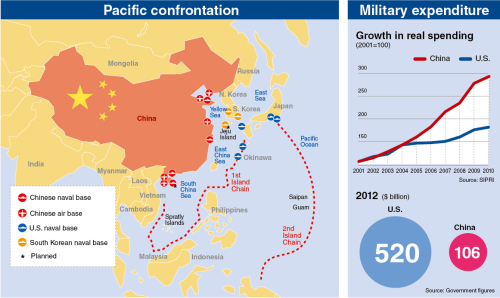 The increasing military rivalry between the U.S. and China may require Seoul to walk more of a fine line between the two powers, experts say.

The U.S. administration announced in January a significant shift in its military capability ― especially seaborne firepower ― toward Asia, with Pentagon planners making little secret of their intention to keep China’s rising power in check.

The U.S. move, matched with China’s naval build-up, has raised concerns over an arms race in the west Pacific region.

China announced in March its defense budget would be increased by 11.2 percent from $95.6 billion last year to $106 billion in 2012. Beijing has expanded its annual military expenditure by double digits for the past decade except for 2010.

The U.S. has said a planned cut of $485 billion out of its defense spending over the next decade would not affect its capability to project power over the vast distances of the Pacific.

The increasing military rivalry between the U.S. and China may put Seoul in a more delicate position in dealing with the two powers crucial for its security and handling of its hostile northern neighbor, officials here say.

“Seoul may be pressed into shedding new light on its military alliance with the U.S. amid the escalating Sino-American confrontation,” said Shin Jung-seung, a senior researcher at the Korea National Diplomatic Academy, a training and research arm of the Foreign Ministry.

“China has so far refrained from taking issue with the South Korea-U.S. alliance,” he said. “But if Beijing increasingly feels the alliance is targeted at it beyond North Korea, it would begin putting pressure on Seoul.”

Under the circumstance, some experts here note South Korea may be required to balance its ties with China and the U.S., which have been tilted toward Washington under President Lee Myung-bak, whose five-year term ends in February 2013.

According to a 2011 survey of people in South Korea, China and Japan, the Chinese proved most worried over the possibility of a military clash in Northeast Asia.

About 68 percent of Chinese respondents said it could be possible for a military clash to occur in the region, compared to 56 percent in Japan and 50 percent in South Korea.