Seidt was awarded an honorary doctorate in philosophy from Chonnam National University, which previously conferred the same honor on former President Kim Dae-jung.

CNU president Kim Yoon-soo presented the honorary degree to Seidt on Friday at a ceremony at the university’s Gwangju campus. 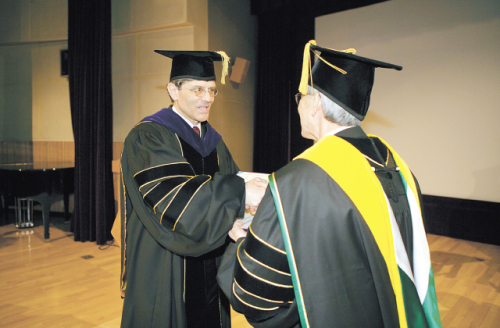 German Ambassador Hans-Ulrich Seidt receives his honorary award from Chonnam National University on Friday. (CNU)
“Dr. Seidt has lived an exuberant life as a passionate person devoting his days on aspiration and desire of peace which originates from the first stage of German unification after the Cold War,” Kim said.

“He has realized that unification can be also accomplished in Korea on the basis of combination of three factors; freedom, peace, and democracy.”

Seidt took the chance to learn about Korean language and culture by giving lectures on world politics at the university for three months. He then helped the university establish a close partnership with Universitat Leipzig of Germany and helped CNU establish the Fraunhofer lab at Hwasun Biomedical Convergence Center with Korean government funding.

After passing the bar examination, Seidt studied at the Ecole Nationale d’Administration in Paris before joining the Foreign Office in 1982. He has been posted in Moscow, Nairobi, Brussels, Washington and Afghanistan.

He already holds honorary doctorates from the University of Valparaiso in Indiana.