During his inauguration speech at the ASEAN-Korea Centre in Seoul, Ambassador Chung Hae-Moon said that Southeast Asia was experiencing profound transformations to its political and economic landscape. Democracy fighter Aung San Suu Kyi’s National League for Democracy party won by a landslide in Myanmar’s recent by-elections, and the reformist government is liberalizing many aspects of the country’s economy. 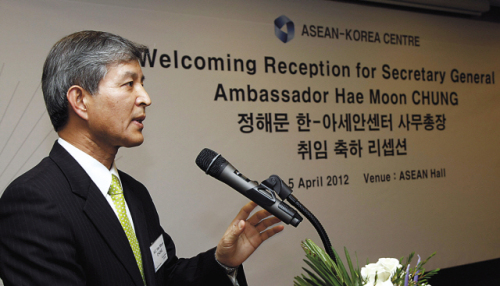 ASEAN-Korea Centre secretary general Chung Hae-Moon
“ASEAN is once again, catching the attention of the entire world on the spur of the breathtaking and stunning democratic changes in Myanmar,” Chung said. “The launch of ASEAN Economic Community in 2015 will certainly generate more opportunities for investors and business communities of Korea and ASEAN. I believe that we must never fail to seize the benefits that could be gained by the completion of the ASEAN community building.”

Chung also called on Korea and ASEAN to redouble efforts to deepen and broaden their strategic partnership, adding that countries in the region had cooperated well with Korea to address issues such as the global financial crisis and the threat of nuclear terrorism.

He added: “From the perspective of ASEAN, Korea has become a strategically important, economically crucial, and culturally rich partner. Korea’s soft power seems to make its impact felt everywhere in Southeast Asia. It fosters an atmosphere favorable for various exchanges between Korea and ASEAN. We need to ensure that Korea’s soft power will continue to capture the imaginations of the people in Southeast Asia.”