The all-new 2013 Santa Fe, a crossover utility vehicle, is designed for drivers and passengers with high expectations for functionality and comfort, Hyundai said in a statement.

There are two models for the third-generation Santa Fe ― the two-row, five-passenger “Santa Fe Sport” and the long wheelbase three-row, seven-seater “Santa Fe.” 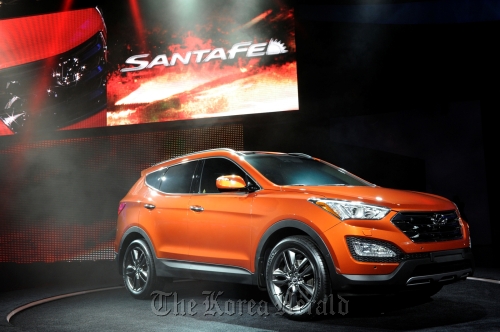 Over the past decade, Hyundai Motor’s Santa Fe models have led Korea’s sport utility vehicle market with the carmaker’s Veracruz and Tucson series.

In 2006, the Santa Fe went into production at the carmaker’s manufacturing factory in Alabama and has been sold across the world’s biggest automobile market.

In 2007, four minivans and SUVs of Hyundai Motor and Kia Motors were included on the list of the 34 “safest” cars selected by the Insurance Institute for Highway Safety in the U.S.

The Santa Fe, Veracruz and Entourage and Kia Motors’ Sedona earned the “Top Safety Pick” award for their performance in safety tests, while the Sedona (dubbed the Grand Carnival in Korea) got the nod in the minivan category.

The Santa Fe was selected as one of the top picks in the category of SUV along with the BMW X5.

The IIHS tests vehicles from convertibles to trucks, rating how they do in front, side and rear collisions. It also checks the performance of the electronic stability control of the vehicles.