[ The Korea Herald – Send E-mail ]
‘Planet of Snail’ invited to Canadian film fest
By Claire Lee
Published : Mar 25, 2012 - 18:35
Updated : Mar 25, 2012 - 20:04
Director Yi Seung-jun’s award-winning documentary “Planet of Snail” has been invited to yet another major documentary festival overseas, following its invitation to the 11th Tribeca Film Festival earlier this month, according to the movie’s production house.

An everyday portrayal of a hearing and visually impaired man and his wife, the film will be featured in the competition section of Hot Docs, North America’s largest documentary film festival held annually in Toronto, Canada.

A total of 189 films have been selected from among the 2,085 submitted for this year’s festival, which is slated to kick off next month. “Planet of Snail” is the only Korean movie invited by Hot Docs this year. 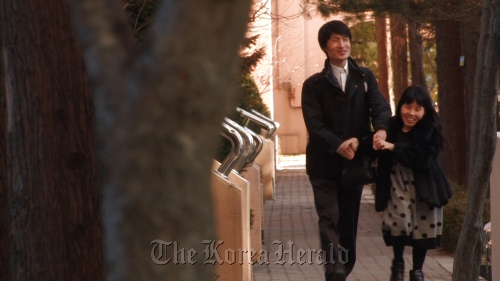 A scene from director Yi Seung-jun’s documentary “Planet of Snail.” (All That Cinema)
This isn’t Yi’s first time heading to Hot Docs. His 2008 film “Children of God” was featured in the Canadian film fest back in 2009. In the same year, another Korean film, “Old Partner” by director Lee Chung-ryoul, won the emerging artist award at the festival.

Earlier this month, the production house of “Planet of Snail” announced that the film has been invited to Tribeca Film Festival’s world documentary section, which is set to open next month as well. The movie is the first Korean documentary to be invited to the New York-based film fest’s competition section.

The invitations from the two film fests come after the film won the top prize at the International Documentary Film Festival Amsterdam, the world’s largest documentary film festival, last year.

The movie opened in local theaters last week, and is also scheduled for a U.S. release in the summer. It became the first Korean film to be released along with its barrier-free version, which is accompanied by a descriptive audio feature and subtitles that narrate each and every action of the film. The special version, narrated by veteran rock singer and actor Kim Chang-wan, has been made to cater for people with hearing or visual impairments.

Hot Docs runs from April 26 to May 6, while Tribeca Film Festival will run from April 18 to 29.