In an increasingly volatile race for parliament, nuclear power is creeping up the political agenda as opposition lawmakers seek to exploit growing safety jitters to retake power in next month’s vote.

Concerns about the safety of the nuclear industry are rife after news broke last week that plant operators had attempted to cover up a power cut at a reactor in Busan for over a month.

Though it caused no damage or radiation leakage, the incident appears to be eroding public confidence in atomic energy, which had already withered in the aftermath of last year’s nuclear disaster in Japan. Environmentalists and opposition lawmakers lambasted the government for creating a “moral hazard.”

“If civic groups or politicians who resist the construction of reactors act upon the project, the whole process can be delayed or even called off.” 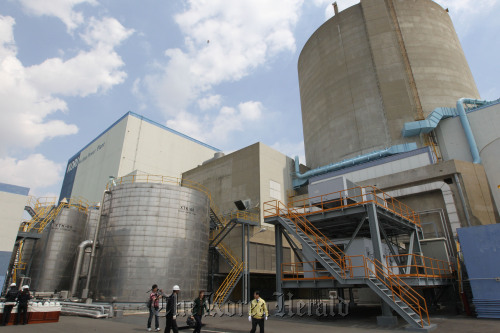 The Gori-1 reactor at a nuclear power complex in Busan. (Yonhap News)
Scrambling to win more seats, Han Myeong-sook, chairperson of the main opposition Democratic United Party, promised to curb the country’s reliance on nuclear energy if her party comes to power.

“The government may have been able to avoid overheating the reactor, but failed to avert a meltdown of public trust and the principles of truth and responsibility,” the former prime minister said Friday.

A poll released on March 6 showed that more than six out of 10 Koreans are against the government’s plans to boost the use of nuclear power. Nearly 80 percent of 1,100 respondents said they oppose extending old reactors’ lifespan.

These figures are significantly higher than at any point in the past several years on a nationwide basis. The survey was complied by Wise Research Co., a polling firm, and commissioned by the Korean Federation for Environmental Movement, a civic group.

On Wednesday, some 200 residents in Busan and adjacent Ulsan held a rally calling for the shutdown of the distressed Gori-1 reactor. Similar protests with up to 1,000 took place a week earlier in Seoul and Samcheok, Gangwon Province, marking the first anniversary of the Fukushima meltdown.

“We need to overhaul everything from hardware to software to governance,” said Hwang Il-soon, a nuclear energy system engineering professor at Seoul National University.

“Hiding a problem could lead to a bigger problem. Ethics plays a pivotal part in atomic power ― high technology without ethics does not avail.”

The anti-nuclear sentiment poses grave challenges to President Lee Myung-bak and his Saenuri Party, who are already grappling with rising voter disillusionment in the run-up to the presidential election in December.

Lee, who is barred by law from seeking reelection, has been pushing the sector as a growth driver and a viable source of energy. He aspires to transform the country into a leading reactor exporter following a watershed deal with the United Arab Emirates in 2009.

Government officials are growing uneasy especially with the Nuclear Security Summit in Seoul just a week away. About 50 heads of state and top officials from multinational bodies are slated to discuss issues like the peaceful use of atomic materials and measures to combat nuclear terrorism on March 26-27.

Meanwhile, the ruling Saenuri remains mute ― though it is likely to safeguard the status quo. The conservative party has been trying to decouple itself from the unpopular commander-in-chief since its stunning defeat in last year’s by-elections. Reps. Kim Moo-sung, Jeong Kab-yoon and Lee Jong-heuk are among its vocal advocates for nuclear power.

“Considering our economic situation, we should take this opportunity to safely expand atomic energy rather than stressing only its dangerousness because of what happened in Japan,” said Kim, who served as floor leader of the former Grand National Party last year.

While acknowledging risks, however, experts urge politicians to refrain from prioritizing their political ambitions ahead of energy security.

“Reassessing the system is one thing, but getting confused over its role is another,” said Chang Soon-heung, president of the Korean Nuclear Society and a professor at Korea Advanced Institute of Science and Technology in Daejeon.

“Nuclear power, in particular from the Gori-1 unit, has extensively contributed to supplying cheap electricity and in turn achieving economic growth and a higher standard of living. That’s something we should not forget.”

Currently, 21 reactors generate around 31 percent of Korea’s electricity. The government plans to jack that up to 59 percent by 2030 by installing at least 13 additional units.

Since the first one in Gori went into operation in 1972, the reactors have not had any major accident.

Lee Heon-ju, a nuclear and energy engineering professor at Jeju National University, says that there is no viable alternative to atomic energy in sight.

A solar power station must be as large as 66 million square meters to generate the equivalent amount of electricity from just one nuclear reactor, according to Lee. That makes solar energy highly uncompetitive at a commercial level in a small country like Korea, he explained.

“It will be great if Korea is capable of reducing its dependence on atomic energy, but it lacks natural resources,” Lee said.

“We spend hundreds of billions of dollars every year on oil and gas imports. Given the lower feasibility of other renewable resources, cutting the use of nuclear energy will only push up imports and heap more of a burden on the national economy.”

To regain public trust and ensure safety and security after the Fukushima debacle, the government laid out sweeping safety checks and contingency schemes at existing stations, while notching up earthquake resistance limits for upcoming ones.

It also crafted 50 short- and long-term action plans based on worst-case scenarios that cover an extreme natural disaster, power failure and severe accident, to which the International Atomic Energy Agency gave a positive review recently.

On Wednesday, Knowledge Economy Minister Hong Suk-woo apologized for the latest power loss, vowing to penalize those at fault. Moon Byung-wee, the chief of the Gori-1 unit who allowed the concealment of the incident, was sacked Thursday.

“The government should keep in mind that safety and honesty come before punishment,” Chang at KAIST said.

“Plants are run by humans, so there may be mistakes and errors. The government should try minimizing it rather than intimidate workers and make a culture of punishment in order to spare itself public criticism.”