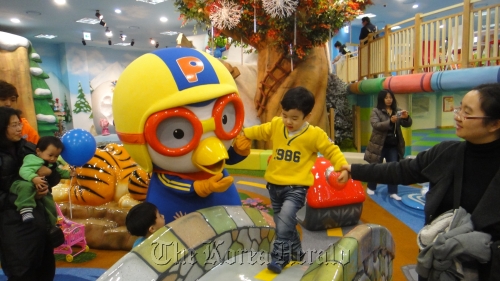 “Children’s favorite in other Pororo Parks is the ‘Sing Along Show’ where children can actually meet Pororo. And they simply love riding on ‘The Little Train’ and the ball pit as well,” a worker for the new park said. Currently there are five other Pororo Parks in the country.

“Parents are more interested in the educational side. They like children’s programs such as the ‘Creativity Class’ and photography lessons which are offered free of charge,” the worker added.

“KINTEX is turning itself into a cultural complex with Racing Park, a wireless-controlled race car game facility, Pororo Park and other diverse experimental spaces,” a KINTEX CS public relations officer said. “We are expecting many family visitors.”