Just a day before the press premiere of her upcoming film “Gabi,” actress Kim So-yeon could not hide her nervous excitement. It was a rainy day in Seoul, and Kim said she listened to singer Sim Soo-bong’s melodramatic song “Binari” on her way to the cafe in Samcheong-dong to calm herself down.

“I’ve been waiting for the release date so badly,” the 32-year-old told The Korea Herald on Monday. “But now I’m rather worried a little. I really don’t know what the viewers will think.”

The upcoming period thriller, where she stars as Joseon’s first barista, is Kim’s second movie in her 18-year acting career. The former teen star, who once dominated the small screen in the 1990s, is returning to the big screen after 15 years, the first time since her 1997 teen drama “Change.”

“I was really excited when director Jang Yoon-hyun contacted me for ‘Gabi,’” she said. “His famous film, ‘The Contact,’ was released in the same year as my film ‘Change.’ I remember admiring the leading actress Jeon Do-yeon while I was watching the film.”

Not many would still remember that Kim was the first teen star to earn more than 100 million won by modeling for TV commercials. She broke into the entertainment industry in 1994 at the age of 14 by entering a pageant competition ― without her parents’ approval. She used a writing marker as her eyeliner that day, and ended up winning the top prize. 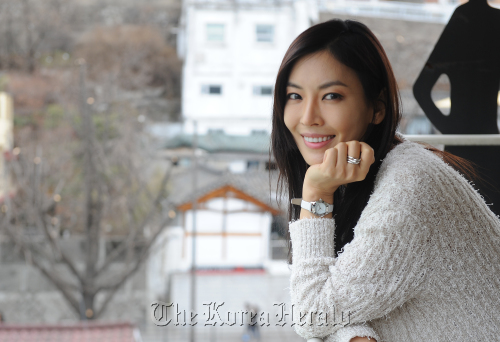 Actress Kim So-yeon poses for a photo during an interview with The Korea Herald on Monday. (Lee Sang-sub/The Korea herald)
“My mother was very against the whole idea of my becoming an actress, but she knew what I was doing that day,” she said, laughing. “She didn’t even look at me while I was getting ready. I had no make-up products of my own, but I knew I had to apply ‘something’ on my eyes. So I just grabbed my marker and tried to whip something up with it.”

Not long after her TV debut in 1994 through SBS teen drama series “Dragon Teacher,” Kim’s heyday came. She was recognized for her mature look and poise, which seemed beyond her young age, and landed much older roles on TV. She starred in popular TV shows including “Yes Sir” (1996), “Soonpoong Clinic” (1998), and “All about Eve” (2000), while appearing in countless TV commercials and hosting pop music shows ― until her popularity went downhill in the mid-2000s.

“I don’t think I was actually mature for my age at the time ― I was just another teenager,” Kim said. “I acted as if I were mature, and thought that was the right way to behave. Very often I felt like I didn’t fit in. Because I had to act characters that were older than I was, I was surrounded by actors and actresses who were much senior. I didn’t know how to be around them when we weren’t acting together.”

Kim’s career resumed in 2010, when she played the role of a North Korean agent Seon-hwa in KBS2’s hit drama show “Iris.” Her next TV drama, SBS’ ‘Prosecutor Princess” (2010), also was a success.

“Before “Iris,” I often felt like I started this too early,” she said. “Maybe I made my debut when I wasn’t even ready. But those times made me who I am now, and I am grateful for that. I love being 32 now. I also liked being that teenager under much spotlight. But I don’t want to go back. I know so much more than what I knew then. I’m more content and comfortable.”

In the upcoming period movie set in the late Joseon era, Kim plays King Gojong’s barista Tanya, who carries a secret mission to assassinate the ruler. The movie’s title, “Gabi,” refers to “coffee” in late Joseon dialect. It is based on author Kim Tak-hwan’s historical novel “Russian Coffee.” To play the character who had a Russian upbringing and makes exceptional coffee, Kim spent months studying the Russian language and coffee brewing even before shooting began.

“I found Tanya to be very cool and a self-centered woman in the book,” Kim said. “But the Tanya I play in the film is more warm-hearted, and ends up empathizing with the king. I wanted to focus on the moments when she feels for the person whom she is in fact assigned to kill.”

Mentioning that she’s inspired by the life and work of Meryl Streep, Kim said her goal is to act as much as she can. “I’d like to be remembered, that’s pretty much what this is about,” she said. “I’d like to be the kind of actress whom everyone feels like she’s been with them throughout their lives, from their childhood to the late years.”

“Gabi” opens in theaters on March 15.