The laboratory, which will sit on an 8,000-square-meter site in Yantai, eastern China, will be devoted to developing wheel loaders, the Korean engineering firm said. Construction will be completed by the end of the year.

The Seoul-based company said it will spend 11 billion won ($9.8 million) to install cutting-edge research tools, a technology exhibition hall and an audio-video theater in the facility. 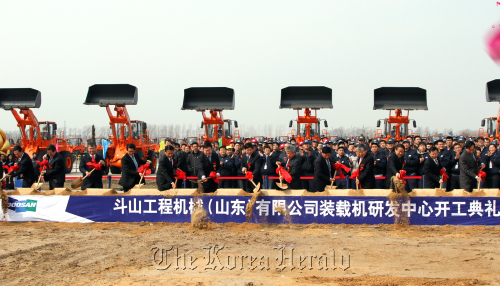 Doosan Infracore, which specializes in earth-moving machines such as excavators, loaders and forklifts, has been scaling up its operations in China, seeking a slice of the brisk infrastructure projects and rapid industrialization in the world’s second largest economy.

The company runs two plants in Suzhou and Shandong to churn out compact excavators and large wheel loaders, respectively.

The Chinese wheel loader market has been expanding by up to 10 percent annually over the past few years to 221,000 units last year, according to Doosan.

“Despite a recent decline in China’s excavator market, demand will rebound after the second quarter of this year, boosting Doosan’s construction equipment business there,” said Suh Jung-duk, an analyst at Meritz Securities Co., a brokerage in Seoul.