It is a common public perception: Korea is soft on white-collar crime, particularly when it involves high-level politicians, government officials or chaebol.

Speaking at the breach of trust case against Hanwha Group chairman Kim Seung-youn, an unnamed prosecutor implored the nation’s justice establishment to take a greater stand against corporate crime.

“If we continue to fail to punish (tycoons) for one reason or another, our society has no future,” the prosecutor said at the hearing at the start of February, demanding a nine-year prison term and 150 billion won ($134 million) in fines for Kim.

The recent history of criminal sanctions against chaebol heads could be said to lend credence to this view. A recent analysis by chaebol.com noted that not one of the seven heads among the top 10 chaebol sentenced to prison since 1990 has served jail time.

The business leaders, from Samsung Group, Hyundai Group, Doosan Group, Hanwa Group, SK Group and Hanjin Group, collectively received 22 years and six months in prison for crimes ranging from tax evasion to embezzlement. All, however, were given suspended sentences initially, later followed by a presidential pardon. 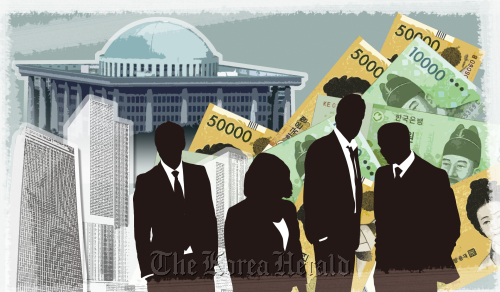 “I don’t know any other major country ― South Korea is an OECD member, a G20 member, the world’s seventh-largest exporter, you know, a big economy now ― where it is now routine for people, not just any old businessman, but the top people … (to) get convicted of stuff, (then) they hardly serve any time and the very next thing they are pardoned because they are so important to the economy,” said Aidan Foster-Carter, a long-time Korea observer based in the U.K.

Foster-Carter recently lashed the country’s attitude toward white collar crime in an Asia Times Online article entitled “The sleaze that shames Seoul.” In it, he took aim at an environment he saw as allowing big business act with impunity.

Among the examples listed were President Lee Myung-bak’s pardoning of Samsung Group chairman Lee Kun-hee, twice convicted of financial crimes, and the appointment of Hanwha chairman Kim, who had previous convictions for currency smuggling and assault before his current charges for embezzlement, to represent PyeongChang’s bid for the 2018 Winter Olympics.

“(It’s) the sort of sense that because they are so important they can do what they damn well please. Which again, I don’t think that is good for any country, is it, for anyone to have that sense they are above the law?” Foster-Carter said.

A sense that the powerful can escape justice is not just confined to the business world. The return of the superintendent of the Seoul Metropolitan Office of Education, Kwak No-hyun, to his post in January despite a conviction for bribing an electoral rival out of the race for the post prompted widespread criticism.

The use of the presidential pardon, too, has often been contentious, with critics charging that it is inevitably used for political purposes. Those in the political world to have benefitted from President Lee’s clemency have included the elder brother of former President Roh Moo-hyun, Roh Geon-pyeong, former Democratic Party National Assembly speaker Kim Won-ki and Suh Chung-won, a former lawmaker and close aide to Park Geun-hye.

Kim Woochan at the Korea Development Institute School of Public Policy and Management believes the current situation is untenable. When it comes to the courts, he says a major problem is judges’ tendency to consider the impact on the national economy in their sentencing, as in the cases of Samsung chairman Lee and Hyundai Group chairman Chung Mong-koo.

“They tend to mix what is legally right and wrong with how much a businessman is contributing to the Korea economy. They keep on considering the second factor and diluting their verdict. I also agree that there are some powerful people trying to get favors. They have influence so they somehow influence not only the judge’s verdict and the presidential pardon, but also even when making the laws they try to influence how the laws are made in their favor,” he said.

Aside from the ethical implications, arguments about how vital chaebol leaders are to the economy are outdated, according to Kim.

“In the old days, especially the founders of the chaebol, they were essential. We wouldn’t have those large corporations without those founders like Lee Byung-chull (the founder of Samsung) and Chung Ju-yung (the founder of Hyundai) and so on. But now we have second generation and third generation and compared to their fathers they are not really essential. I think Korean corporations can survive and even prosper without them,” he said.

Another part of the problem, as Kim sees it, is the cozy relationship between the legal system and business interests.

“Many of those judges and prosecutors, once they retire they become outside directors of Korean major corporations. Especially, because these are lawyers, they would become involved in the cases as … the lawyers for the defendant when they retire and they get heavy legal fees. Those are the practices that, I agree, it might give them incentives to be more lenient.”

But not everyone agrees that the legal system is lacking. Korea University law professor Kim Il-su says that Korean law is actually noticeably strict compared to other jurisdictions.

“I think the law system against white collar crime is sufficient to control such crimes. The sanctions against economic crimes in the special law seem to be a little bit punitive compared to the international standard,” Kim said.

This is a view supported by Yonsei law professor and “Corporate Compliance” author Jeong Young-cheol, who believes enforcement, rather than the laws on the books, is a matter of concern.

“If you look at the special laws on crime of breach of fiduciary duty/misappropriation of corporate funds, the maximum punishment is way too high,” said Jeong. “The amount of fines is also extreme. Again, sufficiently strong. The effectiveness is not always on the same level.”

Overall, Jeong says Korea has a decent record on tacking white-collar crime, one much improved upon from the past. In particular, he points to a soon-to-be-introduced compliance guardian system which will mandate compliance officers at large public companies to ensure adherence to the law.

“The legal and regulatory framework has done a fair job of cleaning up the business world and protecting the public. The number of insider trading criminal cases is similar to that in the United States. Although the Korean business is known to be corrupt, it is being improved. Compared to the past, the situation seems much better.”

Korea University’s Kim also argues that extenuating circumstances, including economic considerations, as in the examples of Samsung and Hyundai, are in fact relevant when it comes to sentencing.

“Those aforementioned cases were already cleared two years ago. When the cases were pending in the Court, the expected roles of CEOs from Samsung and Hyundai in supporting the organizing of the Winter Olympics in PyeongChang were necessary. Therefore, the Korean Court took the unusual circumstance into consideration.”

While Yonsei University’s Jeong also points to an ever more rigorous legal environment, he accepts there remains room for improvement.

“We can do better. How? Try to prevent the crimes, try to make people believe norms are to be observed, try to make rules fair as everyone is ruled by the same law. We should be more focused on the preventive side of crimes than punishment side.”

Others, such as the KDI’s Kim, remain pessimistic about the likelihood of change.

“We thought that it was getting better but it doesn’t look that way anymore especially with Lee Kun-hee’s presidential pardon,” Kim said. “And corporate scandals involving family members do not seem to be ending.”

At the very least, they should not occupy the small firms’ share. It’s a shame chaebol do not show the same attitude they have toward the public good to small firms. Remember, there are no big companies without small companies. We should make a society where we live together. I think that is the first mind-set the corporations should have.

On the student rights ordinance ...

Recently, keeping the student rights ordinance has become an issue again since Seoul passed it. Although the ordinance was passed in order to protect the rights of students, there has been heated controversy over it.

Some people argue that the content involved in the student rights ordinance could become an object of public concern, while others contend that it can bring about positive effects since it can protect the rights of students. As a student, although keeping the ordinance can be beneficial to me, I am against the idea of Seoul keeping it.

Students are overprotected with the student rights ordinance. According to the declaration, students are able to express their individuality through hair and dress. It is said that this law would be carried out by students voluntarily, little by little.

However, it is my point of view that this law cannot be implemented by students voluntarily. It is a well known fact that if students are allowed to do things without any limitation, they are inclined to try new things all of a sudden in order to be different from others and to be better than others.

Although this law is made to respect students’ rights, the way of respecting their rights is wrong. There are certain rules students must follow while they are in school. Students should adjust their dress and keep themselves neat and trim. Allowing students to do whatever with their hair and dress can be overprotection.

Keeping the student rights ordinance could cloud the class atmosphere. In accordance with the ordinance, students can be free from physical and verbal violence.

This law might seem advantageous, because students may face less stress. On other hand, it is my perspective that violence is necessary to a certain degree. Physical and verbal violence can hold back students when they do not follow school rules, do not listen to their teachers and obstruct classes.

I have seen so many cases where students don’t listen to their teachers when they aren’t scolded or punished. When teachers do not punish students, the students disturb classes by chatting and making noise because they know the teachers will not punish them, even though they are acting wrong.

Like the phrase “spare the rod, spoil the child,” punishment is crucial in several situations. Punishment allow teachers to sustain their hegemony and help students study in classes with the best academic atmosphere.

A teacher talks to a student with bleached hair in front of a school gate, saying: “Your hair is against the regulation.”

“Why?” the student replies, biting the teacher’s head off.

“Why do you say ‘why’? It seems that your hair sticks out so much that it interferes with study.”

“A student rights ordinance has passed so that the hair style is liberalized.”

This is not something that could be seen in future school but in our neighborhood now.

After a superintendent of education of Seoul promulgated an ordinance that allows students to liberalize their hair style and dress, hair styles and dress are increasingly diverse and fashion-couscous every day.

Also, the student rights ordinance prohibits examining student’s belongings so that they can bring in goods besides ones related to study, such as cigarettes, mini-skirts and even alcohol.

No doubt, the positive aspect brought by the ordinance also cannot be ignored. One among them, is that students are treated as human beings. At least we don’t have to worry about a teacher’s unreplied violence without any cause.

However, there is a word “dab-da,” meaning “like,” that can be useful to describe this situation.

When soldiers behave like soldiers, the rest of the people can study, work, eat and so on. Imagine if our soldiers wore hip-hop dress and had fingers loaded with rings. Would you be able to sleep at night?

Likewise, when the student is like a student, they are at their most wonderful. Our future lies not in stylish students but in students that act like a students.